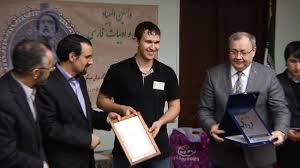 The 10th edition of Persian language and literature Olympiad has been held among the Russian students in the country’s capital city of Moscow, Press TV has reported.

The winners of this year’s competition were announced during a ceremony held on January 24, 2014.

The year’s top award of the competition went to a 20-year-old student Vasily Vdovin from Kazan.

Iran’s Ambassador to Russia and the country’s Cultural Attaché along with several Russian cultural officials attended the award ceremony.

Some 32 of the best students from around the country participated in the competition. They are studying Persian language at universities.

They competed in various categories including language knowledge, reading, grammar and writing skills.

The competition aims to evaluate the quality and educational standards of Persian language and literature.

The level of knowledge of Persian language among Russian students is growing every year. The number of students taking part in it is increasing as well, the competition’s judges stated.

According to an earlier agreement, two countries established several cultural bridges such as cooperation of Russian State Library and Iran’s National Library and Archives.