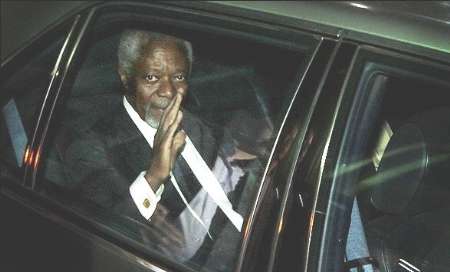 Annan arrives in Tehran for talks on regional issues

NITC director has said the US Treasury has removed Iran’s National Oil and Tanker Company from the sanction list.

Iranˈs Ambassador and Permanent Representative to the UN nuclear watchdog Reza Najafi has said that some members of the International Atomic Energy Agency would pay the cost for monitoring implementation of the Geneva deal.

A big economic delegation from confederation of Asia-Pacific Chambers of Commerce departed for Tehran in a bid to expand trade and investment in Iran.

Dutch Ambassador to Iran Johannes Duma said that removal of sanctions on Iran following the implementation of the Geneva nuclear deal has provided a precious opportunity for the Dutch companies to reestablish their relations with Tehran after nearly a decade of weak mutual cooperation.

An Iranian political poster artist has emerged as 4th in 12th International Triennial of the Political Poster Show in Mons, Belgium.

Iran topped the list of steel producing countries in the Middle East in 2013.

The Indian ambassador to Iran has expressed his country’s willingness to increase and diversify its investment in the Islamic Republic.