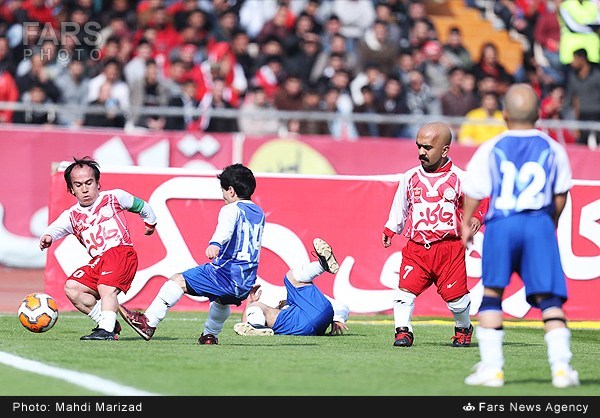 Imagine going to an athletic event featuring the two biggest teams from your favorite sport. The Los Angeles Lakers vs. The New York Knicks, Manchester United vs. Chelsea, you get the idea. Now imagine the athletes are little people and the crowd is chanting: “Koochooloo ba gheyrat…hemayat-hemayat,” which in Persian translates to, “Honorable little ones! We support you! We support you!”

That’s what happened this past week as the little people teams from the two most popular soccer clubs in Iran, Perspolis and Esteghlal, went head to head in an event known as “the Derby,” in Tehran’s 100,000 seat Azadi stadium.  Team Perspolis ultimately beat Team Esteghlal 1-0 in front of an estimated 65,000 fans.  The event was as serious as any soccer match, with fans passionately routing on their team.

The word in Persian for the medical condition known as “dwarfism” is Koochooloo, which translates to “little one.” For a language that prides itself on its 2,500 year-old history, this is not necessarily the most subtle, or more politically correct, of words, not that English has done much better. Nonetheless, in a world where little people are constantly the source of comical relief or even throwing contests, it is nice to see these Iranian athletes at center stage, respected by both their cheering fans and the country’s greater sporting community.

The world’s first little person soccer team was formed in Brazil in 2008.  Since then, many countries around the world have followed suit. With the help of famous actor Yusef Azeri, Iran followed through with its own little people teams in 2009 and the phenomenon has since spread across the country. There are little person teams inTabriz, as well as Bafq in the Yazd Province.  For his part, Azeri has gone out of his way not only to coach the little people soccer teams in Tehran, but also to act as an international ambassador to support and encourage the creation of sports teams for this community.

Last year, Iran and the administration in Iraq’s northern Sulaymaniyah region signed a memorandum of cooperation to support their respective little person populations in the fields of culture, sports, and medicine.  While participating at these negotiations, announced his intentions to host an international little person soccer tournament in Iran with   twelve teams coming from Germany, Iraq , Norway, Australia, England, Brazil, Yemen, India, Pakistan, Austria, and Italy.

As for the  little person players back in Tehran, their goals in joining soccer teams are  somewhat more domestically focused. One of these players, the sixty-four year-old Mostafa, who is also a grandfather, was asked, rather ignorantly, during a recent interview by a State TV reporter as to why he does not hide from society as a result of his medical condition. “I want to be out in society, move around, and have relations with people and exercise, like everyone else,” said Mostafa.

One of Mostafa’s younger teammates had a more profound response  for the reporter when asked why he did not  shy away from the public eye His answer reflects a deeper understanding of the social taboos surrounding his community not just in Iranian culture, but around the world:

“Thank God, all of us (teammates) have so much confidence, and we are all successful in our own way in society, that I think we provide some hope to our countrymen who live with physical limitations and choose to stay indoors and hide out of sight from society. By seeing us (playing) and how active we are, they will be reminded that they can be successful if they decide to enter back into society,” said the unnamed, thirty-nine year-old player.

Photos of last week’s “Derby Match” between the little person teams of Perspolis and Esteghlal  can be found here.