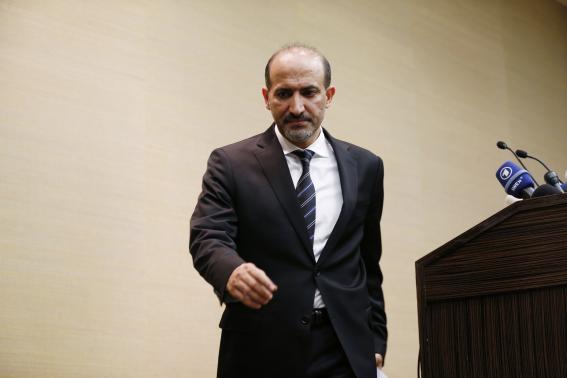 (Reuters) – Syria’s opposition leader laid out his demands for talks on ending his country’s civil war, calling for the creation of a transitional government that does not include President Bashar al-Assad.

Ahmed Jarba told reporters in Geneva, where rival sides in the Syrian conflict are on Friday due to begin several days of negotiations under the auspices of the United Nations and major world powers, that he was looking to a future without Assad.

“We have started to look into the future without him. Assad and all of his regime is in the past now. Nobody should have any doubt that the head of the regime is finished. This regime is dead,” Jarba said.

Moscow, Assad’s major backer, had given assurances that it was not “holding on” to Assad, Jarba said.

Assad’s officials, who left talks with a U.N. envoy on Thursday evening without making any statement, have insisted that the Syrian president is not going anywhere.

U.S. Secretary of State John Kerry also said there was no sign Assad was ready to quit, although he insisted the Syrian leader had no place in his country’s future.

“This is a man who has committed war crimes and still somehow wants to claim legitimacy to be able to govern the country,” Kerry said in an interview with Al-Arabiya television.

But Kerry said there could be a place for officials from Assad’s government in a transitional government as long as they “do not have blood on their hands”.

The opposing views of Assad’s future underlined the difficulties facing the talks, the first time the government and opposition sides have met since the fighting began.

Jarba said the negotiations would be long and difficult, and would look at all the “core issues” as a package deal, including the creation of a transitional governing body.

“This is the basis of our negotiations and we will demand it,” he said.

A Western diplomat, setting expectations for Friday’s talks very low, said the aim would be “to give some momentum to the process and avoid either side walking out”.

Few expect the peace talks to result in a breakthrough to end the war, since Islamist fighters who disdain the Western and Arab-backed opposition are not present at the talks, and nor is Iran, Assad’s main regional backer.

But officials hope they can salvage the process by starting with more modest, practical measures to ease the plight of millions of people on the ground, especially in areas cut off from international aid.

More than 130,000 people are believed to have been killed in the fighting, nearly a third of Syria’s 22 million people have been driven from their homes, and half are in need of international aid, including hundreds of thousands in areas cut off by fighting.

The main negotiations, expected to last up to a week, are due to begin at 11 a.m. (1000 GMT) on Friday at the United Nations headquarters in Geneva.

U.N. envoy Lakhdar Brahimi will meet the two sides in the same room and explain how he plans to proceed. The heads of delegations will address Brahimi, but not each other.

The talks remain fragile, however, with both sides threatening to pull out. The government says it will not discuss removing Assad, while the opposition says it will not stay unless Assad’s removal is the basis for talks.

Among the many difficulties with the process, the opposition delegation does not include the al Qaeda-linked Sunni Islamist militant groups who control much of the territory in rebel hands and have denounced those attending the talks as traitors.

Rebel ranks have been divided, with hundreds killed in recent weeks in battles between rival factions and the al Qaeda-linked Islamic State of Iraq and the Levant. Al Qaeda leader Ayman al-Zawahri called on fighters to unite.