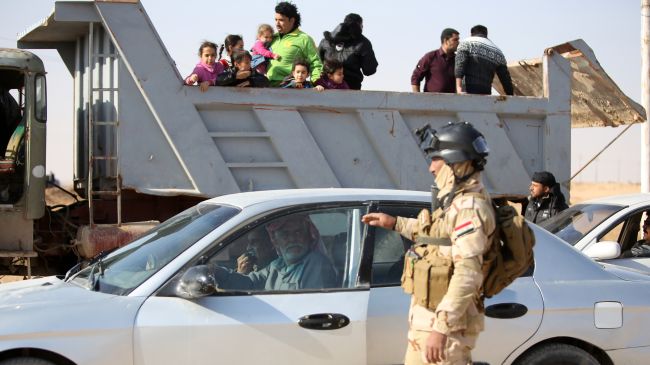 The United Nations refugee agency on Friday said that more than 65,000 people had fled the conflict in the cities of Fallujah and Ramadi in central Iraq’s Anbar province over the past week, bringing the total number of people uprooted since fighting began at the end of 2013 to more than 140,000.

The displacement figures, provided by Iraq’s Ministry of Displacement and Migration, are the largest the country has witnessed since the sectarian violence of 2006-2008 and are a result of deadly clashes between Iraqi troops and Al-Qaeda-linked fighters.

It also comes on top of the 1.13 million people already internally displaced in Iraq, most of whom are residing in Baghdad, the Iraqi capital, Diyala and Ninewa provinces, according to the UN High Commissioner for Refugees (UNHCR).

UNHCR spokesman Adrian Edwards said that people in Anbar, including UNHCR staff, had reported that many civilians were unable to leave conflict-affected areas where food and fuel were now in short supply.

“Most of the recently displaced remain outside Fallujah city, accommodated by relatives or staying in schools, mosques and hospitals where resources are running low. Host families are having difficulties sustaining the burden of caring for the displaced,” Edwards told reporters.

According to him, UNHCR and its humanitarian aid partners had managed to distribute tarpaulins, blankets, sleeping mats, food, and hygiene supplies. The UN agency, for instance, on Thursday delivered 2,400 core relief kits. The Iraqi Ministry of Displacement and Migration and the Iraqi parliament have also sent aid.

“Many of the displaced, nonetheless, are still in desperate need of food, medical care, and other aid. As the insecurity has spread, many families who fled several weeks ago have been displaced again,” said Edwards.

The UN in Iraq has asked the Iraqi government to facilitate the opening of a humanitarian corridor to reach displaced and stranded families in Anbar province. In recent weeks, several bridges leading into the conflict area and communities hosting displaced people have been destroyed, making access difficult.

UNHCR said it is currently impossible to reach the area from Baghdad and relief agencies are using roads coming from northern Iraq.

Other areas of Iraq — including Baghdad, Erbil, Kerbala, Salah- al-Din and Ninewa — have also witnessed the arrival of thousands of displaced people. People are reportedly without money for food and lack suitable clothing for the rainy conditions. Children are not in school and sanitary conditions, particularly for women, are inadequate.

By The Journal Of  Turkish Weekly