Rival political groups in Egypt are to mark the third anniversary of the 2011 uprising which ended in the overthrow of President Hosni Mubarak.

Both supporters of the military-backed government and the Muslim Brotherhood are set to take to the streets.

The anniversary comes as tensions were heightened by a series of bombs in Cairo and clashes across the country which left at least 18 people dead.

The government has said extra security measures are in place for Saturday.

Egyptian Interior Minister Muhammad Ibrahim urged Egyptians not to be afraid to go to events marking the anniversary of the uprising.

But shortly before 06:00 GMT on Saturday, a bomb was thrown at the wall of the police training academy in the Cairo suburb of Ain Shams, reportedly injuring one person.

No-one has said they carried out the attack. Al-Qaeda-inspired militant group – Ansar Beit al-Maqdis (Champions of Jerusalem) – has said it was behind a deadly attack on the city’s police headquarters on Friday.

Earlier Mr Ibrahim warned Brotherhood supporters that any attempt to disrupt festivities would be dealt with firmly.

The BBC’s Yolande Knell, in Cairo, says that three years on from an uprising that raised hopes of political reform in the Arab world’s most populated country, rival demonstrations look set to show the deep political divisions. 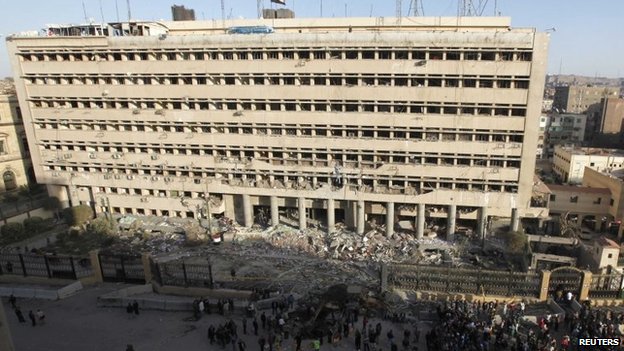 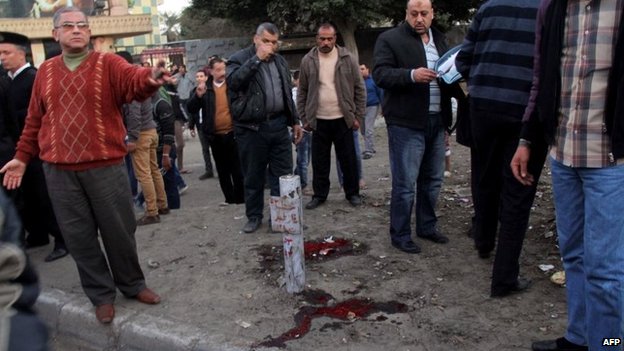 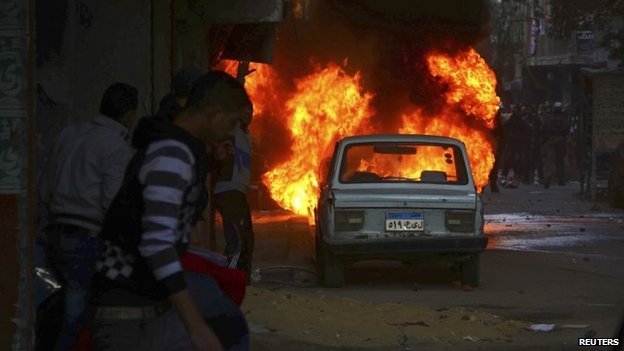 The Brotherhood has been declared a “terrorist organisation” and accused by the interim government of being behind a string of violent attacks in recent months, which the Brotherhood denies.

Mr Morsi, Egypt’s first ever democratically elected president, was removed after mass protests. Many now expect Gen Sisi to run for president, putting a military strongman back in charge in Egypt, as was the case for the six decades leading up to 2011.

On Friday six people were killed and some 100 others wounded in a series of blasts across Cairo, with the biggest blast outside the city’s police headquarters.

That explosion killed four people and wounded at least 76, laving a huge crater in the street.

The Muslim Brotherhood condemned what it called the “cowardly bombings”.

But an angry group gathered outside the police headquarters after the blast, accusing the Brotherhood of being behind Friday’s attacks with some shouting “Death to the Muslim Brotherhood”.

A dozen people were also reported killed in clashes between security forces and Muslim Brotherhood supporters in Cairo and several other provinces on Friday.

The interior ministry said it had arrested 111 people, saying they were “Brotherhood elements” who were “trying to provoke riots”.

One of the demands of the uprising three years ago was more freedom for Egyptians after three decades of authoritarian rule under Mr Mubarak.

However Saturday’s commemorations take place at a time when human rights organisations say rights and liberties in the country are being eroded.