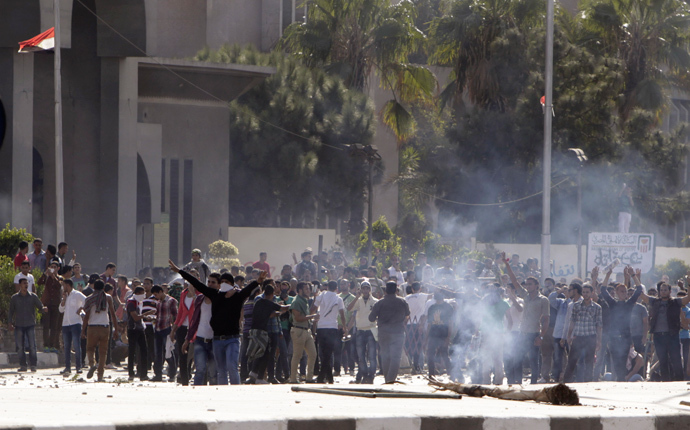 TEHRAN (Tasnim) – Egyptian police fired tear gas at anti-government protesters in Cairo on Saturday, as the country marked the anniversary of a 2011 uprising that overthrew former president Hosni Mubarak.

Police dispersed the protesters soon after they gathered outside a Cairo mosque, an AFP correspondent reported.

They included both Islamist supporters of ousted president Mohamed Mursi and activists who accuse the military of hijacking the government.

Meantime a report by AP said that supporters of the military-backed government celebrated and called on the army chief to run for president in rallies marking the third anniversary of the country’s 2011 uprising.

The report said security forces firing tear gas battled rival demonstrations, both by supporters of ousted president and by secular activists opposed to both camps.

The starkly contrasting scenes reflected the three years of turmoil that have split Egyptians into polarized camps since the revolt that began on Jan. 25, 2011, ousting autocratic leader Hosni Mubarak followed by last summer’s millions-strong demonstrations against Mubarak’s elected successor, Mursi, that led to the coup removing him.

Mursi’s supporters were using Saturday’s anniversary for building up a new momentum in defiance to the military and its political transition plan, despite months of a fierce crackdown that has crippled their ranks and rising public resentment against the group.

Pro-military demonstrators, meanwhile, were turning out in state-backed rallies to show their support for army chief Gen. Abdel-Fattah el-Sissi, the man who ousted Mursi and whom many of those in the rallies want to now run for president.

Security forces also moved to shut down rallies marking the anniversary by secular youth activists who led the 2011 anti-Mubarak uprising and who are critical of bothsides. A number of their most prominent figures have been in prison for months amid a campaign to silence even secular voices of dissent.