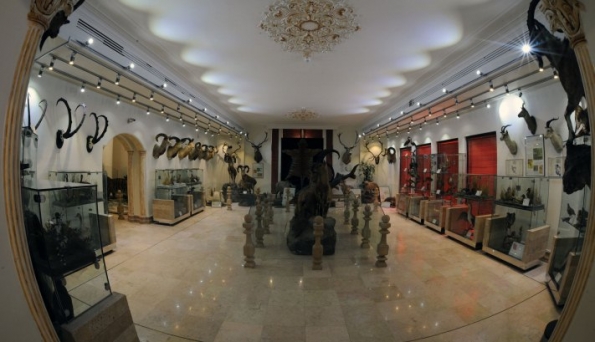 Darabad is a former village on the slopes of the Alborz Mountain Range to the northeast of Tehran, which has become part of Greater Tehran as a result of rapid expansion of the metropolis.

Many people use Darabad as the starting point for mountaineering on the southern slopes of Alborz, especially in summer. It is also the location of Mahak Hospital for children with cancer.

The museum was inaugurated by Dr. Hedayatollah Tajbaksh (the well-known taxidermist) with the help of Tehran Municipality and Department of Environment in 1993.

It seeks to familiarize citizens with natural heritage and protection of environment and wildlife.

The museum joined the International Council of Museums (ICOM) in 1997. In the same year, it launched the online magazine “Nature and Wildlife of Iran”.

It actively participated in the gatherings of ICOM in Spain and IUCN (International Union for Conservation of Nature and Natural Resources) in North Africa.

Iranian and Afghani artists built a dinosaur statue—belonging to Jurassic era—at entrance of the museum in 2001, the dinosaur’s fossil had been found in Kerman, southern Iran.

Built in an area of 12,000 square meters, the museum has two floors and various sections.

The first hall pertains to the wildlife of North America such as moose, which is the largest extant species in the deer family.

The other hall pertains to animals of northern Iran. For example, Mazandaran tiger, which has become extinct, was displayed. It also exhibits animals such as maral (Caspian red deer), buck and beluga sturgeon.

This hall is home to animals belonging to central and southern parts of Iran such as Iranian zebra, leopard, cheetah and tashi (the largest Iranian rodent).

Visitors can see living creatures such as fish living in fresh and saline water, Amazon River and Persian Gulf.

The diverse colors of these species, along with their beautiful movements in water, create a scenic landscape.

There are two species, including leatherback turtle and hawksbill turtle, which are facing extinction.

The hall displays reptiles such as spiny-tailed lizard and desert monitor lizard.

There are glass displays for exhibiting butterflies and insects. They include butterflies of Australia and East Asia, such as Morphidae and Pandoriana Pandora.

Also, butterflies of Iran such as Papilo Demoleus, Pieris Brassica and Danaus Chrysippus are exhibited.

In the Taxidermy Hall, there are workshops for watching and learning different techniques of preserving natural animals.

Also a diorama, a three-dimensional, full-size or miniature model of habitats of wildlife—enclosed in a glass showcase—has been placed here.

Models of stuffed fish and crustaceans have been put on display.

While the African Hall has displayed the bovidae family and African lion, the Pond and Birds Hall exhibits birds such as ducks and parrots in a pond.

Darabad Museum has published many environmental books for children and adolescents. It holds training courses for schoolchildren in cooperation with NGOs in summer.

The museum annually holds Child and Nature Festival to commemorate World’s Children Day for one week. It also organizes other programs to familiarize children with environmental issues.

The museum held the International Caricature Festival on nature with the participation of famous cartoonists.

The museum library has over 15,000 books in specialized environmental fields. It is considered a top library of botany, zoology and geology in Tehran. It is the first public library to provide online access to visitors since 1997.

The outdoor cinema operates during summer.

The museum also has a traditional teahouse overlooking the city of Tehran. There is a veterinary clinic near the museum building, which treats pets.