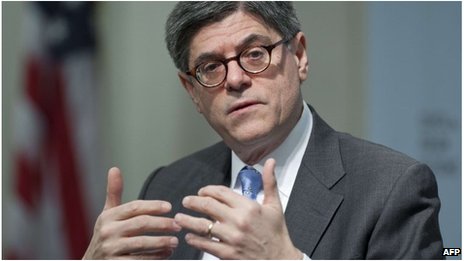 US says businesses should be ‘cautious’ over Iran

US Treasury Secretary Jack Lew has said companies must “proceed with caution” when dealing with Iran, in an interview with the BBC in Davos.

Mr Lew, who is attending the World Economic Forum, said recent easing of sanctions represented “limited relief” and most sanctions were still in place.

The US eased restrictions on products including cars and petrochemicals.

Iranian President Hassan Rohani is also at the summit and analysts say he is touting Iran for potential investors.

“I think it would be a big mistake for companies to over-read how open for business [Iran is],” Mr Lew said, in an interview on the sidelines of the forum.

Mr Lew credited sanctions on the oil and financial services sectors with helping to bring Iran to the negotiating table with world powers.

Since those sanctions have been “so effective”, the Treasury Secretary said, the US position has not softened overall.

“Any company that crosses the line and engages in activity that violates those sanctions is subject to enforcement actions,” Mr Lew said.

“We’re going to monitor and enforce the sanctions – as we’ve said quite directly.”

The US eased some of its restrictions on Iran, as negotiations on its nuclear programme appeared to make progress.

While speaking to the BBC, Mr Lew also expressed some optimism over the US and global economic outlook.

He said: “We’re looking at what should be a good year, as long as we don’t have any unexpected surprises, including the kinds of self-inflicted problems like the government shutdown was last year.”

Mr Lew also commented on Chinese reforms of its economy, which faces a large burden of debt.

He said that while the direction of change seemed clear, he did not know whether reforms would be made quickly enough.