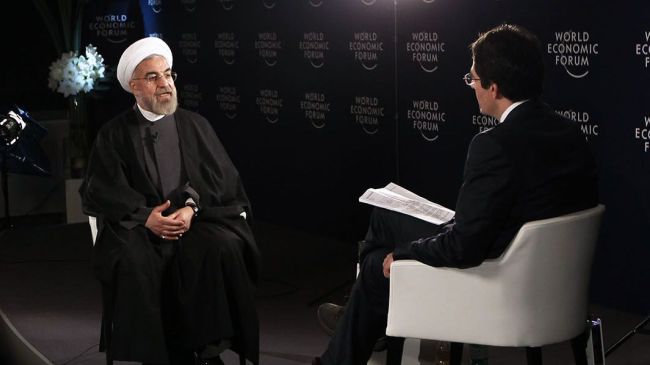 Syria’s fate must be in Syrians’ hands: Rouhani

Iranian President Hassan Rouhani has stressed that the fate of Syria needs to be determined solely by the Syrian people, rejecting any interference in the future of the Arab country.

Speaking to Swiss TV station RTS on the sidelines of the World Economic Forum (WEF) in Davos, Switzerland, Rouhani reacted to remarks by US Secretary of State John Kerry, who called for regime change in Syria.

In an opening statement at the start of the Geneva II conference on the crisis in Syria in the Swiss city of Montreux on Wednesday, Kerry said that Syrian President Bashar al-Assad should have no place in the future of the country.

President Rouhani said, “I believe that only Syrian people are allowed to decide and nobody else can pass a judgment on the future of Syria.”

“Decision-making is for the Syrian people to do and they are the ones who should determine their own future, and in doing so, the first condition is that bloodshed be stopped and certain countries give up supporting terrorism,” the Iranian president added.

Rouhani went on to say that countries advocating the terrorists in Syria will undoubtedly fail to achieve their objectives, which, he said, is expanding their influence in the region at the very least.

The Iranian president further warned that the scourge of terrorism would haunt back those countries that are now sponsoring it.

The Geneva II conference, which is aimed at containing the bloody turmoil in Syria, kicked off in Montreux, Switzerland, on January 22. The international event is scheduled to resume at the UN office in Geneva later on Friday.

The participants meeting in Montreux were immediately divided over the role of the Syrian president in the future of the country, with the so-called Syrian National Coalition (SNC) and its Western supporters insisting that Assad must step down and a transitional government be formed in Syria while Damascus dismissed such a demand, arguing that the foreign-backed coalition does not represent the Syrian opposition.