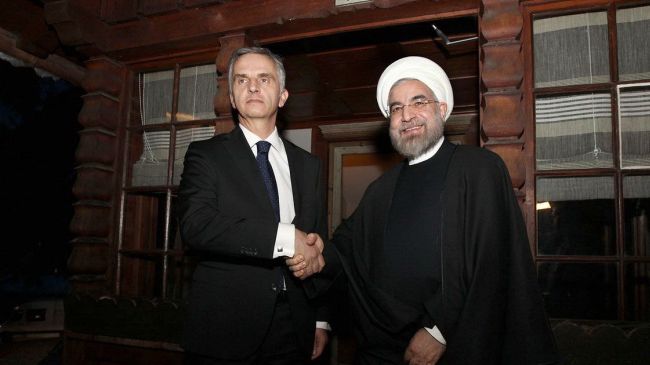 In a Thursday meeting with Swiss President Didier Burkhalter in Davos, Switzerland, Rouhani pointed to the Islamic Republic’s humanitarian aids, including food and medicine, to Damascus and said, “Iran is ready to do its utmost to help other countries, especially the European ones, with the delivery of aid to Syria.”

Iran has dispatched several consignments of humanitarian supplies, including medicine and medical equipment, to Syria to help the people affected by the unrest in the Arab country.

Expressing gratitude to Switzerland for hosting the nuclear talks between Tehran and six world powers, Rouhani said that the nuclear negotiations have provided a good opportunity for Europe and the West to bring about better conditions in the Middle East and the world.

Iran and the five permanent members of the United Nations Security Council – Russia, China, France, Britain, and the US – plus Germany struck an interim nuclear deal in the Swiss city of Geneva on November 24, 2013. The interim accord, which went into effect on January 20, is aimed at setting the stage for the full resolution of the decade-old standoff over Iran’s nuclear energy program.