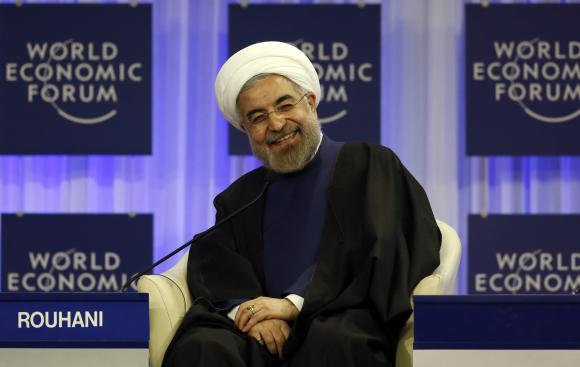 Rouhani tells davos Iran will push for final nuclear accord

Iran’s will to reach a comprehensive accord is “present and strong,” the president said today at theWorld Economic Forum in Davos, Switzerland. Hurdles may arise if other parties show a “lack of serious will” to secure a deal, he said.

Rouhani, the first Iranian leader in a decade to visit the Swiss ski resort for the forum, is looking for investment to boost an economy that shrank more than 5 percent in the last fiscal year through March under the weight of international sanctions imposed to punish the Islamic Republic for its nuclear work.

Rouhani’s Davos speech follows the implementation this week of an interim deal between his nation and six world powers that curbs Iran’s atomic program in exchange for about $7 billion in sanctions relief. The accord, struck in Geneva Nov. 24 with the U.S., the U.K., France, Russia, China and Germany, marks the first breakthrough in a decade-long standoff.