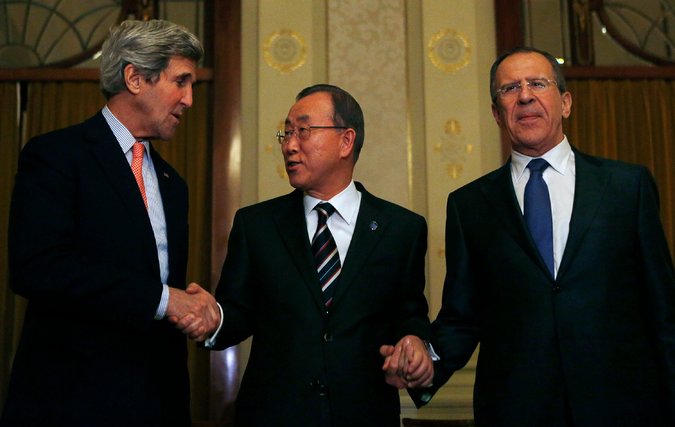 (Reuters) – U.S. Secretary of State John Kerry on Wednesday left the door open for Iran to participate in Syrian peace talks, saying Tehran could make a difference in ending the conflict.

“Iran certainly does have an ability to be helpful and make a difference,” Kerry told a news conference at the end of an international conference seeking to resolve the Syrian crisis.

“We hope they will decide to be constructive and make a decision to operate in a way going forward that can allow them to do so,” Kerry said, adding: “There are plenty of ways that that door can be opened in the next weeks or months, and my hope is they will want to join in a constructive solution.”

The talks were thrown into disarray before they began when U.N. Secretary-General Ban Ki-moon invited Iran to join the conference but withdrew the offer after Tehran refused to endorse the principles of an earlier 2012 peace plan.

Iran blamed the United States for the withdrawal of its invitation, but Ban defended his decision to uninvite Iran.

“I believe that I have taken the right decision even at the last minute,” Ban said.

Kerry repeatedly emphasized his view there was no solution to Syria’s crisis while President Bashar al-Assad was in power.

“The resolution to this crisis cannot be about one man’s insistence or one family’s insistence about clinging to power.

“This needs to be about empowering all of the Syrian people,” he added.

Even as government and rebel groups agreed to continue talks in Geneva under UN supervision, Kerry said the United States would pursue other ways to force change in Syriain cluding increased support for the opposition.

“Talks take a while. None of us are satisfied with leaving Syria to the kind of horrendous acts that have been engaged in, which is why I have said there will be parallel efforts being made even while the talks are going on, in order to try to find different pressure points and different ways of finding a solution,” he added.