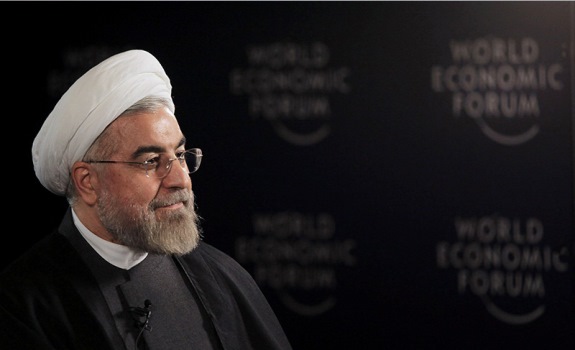 DAVOS, Switzerland (AP) — Iranian President Hassan Rouhani says his country is ready to do business and cooperate on global issues like climate change and Syria’s crisis, in a speech aimed at persuading world leaders that Tehran is committed to ending years of international isolation.

Rouhani claimed the spotlight at the annual World Economic Forum on Thursday owing to a variety of factors: Iran’s pivotal role in the Middle East; its exclusion from peace talks to end the 3-year Syrian conflict; and a nuclear deal with world powers that has businesses in Europe and beyond preparing to rush back into the country.

Iran, he said, is “fully prepared and ready to engage with all neighboring countries to achieve shared practical solutions” on a range of issues including environmental concerns, business ventures, Palestinian rights, Persian Gulf security and Syria’s humanitarian crisis.

The Iranian president, accompanied by Foreign Minister Javad Zarif, who negotiated a deal with world powers to limit Iran’s nuclear program, emphasized that Tehran will abide by the terms of that deal in exchange for some sanctions relief and the unfreezing of about $4.2 billion in overseas assets. Over the next half-year, Iran and world powers will try to forge a permanent deal.

The agreement paves the way for new business deals, which Rouhani and Zarif will be eager to discuss at Davos, which brings together hundreds of corporate tycoons.

“We intend to reopen trade, industrial and economic relations, with all of our neighbors” including Turkey, Iraq, Russia, Pakistan and Afghanistan, Rouhani said.

Rouhani said he hopes Iran’s historical deep economic ties with Europe will be normalized and suggested that U.S.-Iran negotiations over the nuclear deal could pave the way to better relations. He reiterated, however, the country’s position that it has no intention of acquiring nuclear weapons but has the right to continue pursuing peaceful nuclear energy.

He said he “does not see an impediment” to following up on the nuclear deal, but warned other countries might lack the political will. As he spoke, EU foreign policy chief Catherine Ashton, who helped broker the nuclear deal, sat in the front of the hall, listening intently.

“I see the status of Iran pursuing policies of moderation, prudence and hope in the future global economy as greater than predicted,” Rouhani said. “Iran’s economy has the potential to be among the world’s top 10 in the next three decades.”

On the eve of the first face-to-face talks between Syria’s government and opposition in Geneva, Rouhani suggested that “the best solution is to organize free and fair elections in Syria” and that once the ballots are cast “we should all accept” the outcome. Iran’s Shiite-led government and financial support is central to President Bashar Assad’s grip on power.