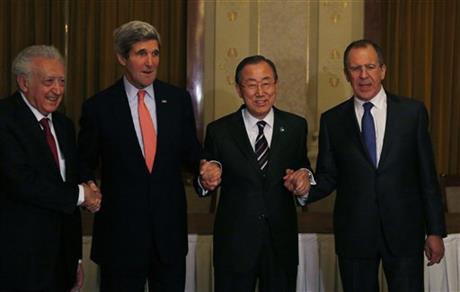 MONTREUX, Switzerland (AP) — Syria’s foreign minister has accusing his country’s opposition of being traitors and agents of Israel and says neighboring countries set Syria ablaze by sending arms and fighters to the civil war.

Kerry said President Bashar Assad would have no place in the transitional government that is the stated goal of the peace talks.

Al-Moallem refused to give up the podium to U.N. Secretary-General Ban Ki-moon after his accusations against the Western-backed opposition “sitting in this room” and other countries present at the meeting in Switzerland.

Ban Ki-moon called on the Syrian government and the Western-backed opposition trying to overthrow it to negotiate in good faith as they meet face-to-face for the first time.

“We know that it has been an extremely difficult path to reach this point. We have lost valuable time and many, many lives. Let me not mince words, the challenges before you and before all of us are formidable. But your presence here raises hope,” he said in his opening remarks.

The world’s most powerful diplomats – including U.S. Secretary of State John Kerry and his Russian counterpart – gathered in Montreux, Switzerland, for the talks, which had been in doubt just two days ago.

But the Syrian National Coalition, the umbrella group representing the opposition, is in disarray, with little influence on rebel brigades fighting in Syria. And Iran, which is one of President Bashar Assad’s major backers, was invited and then disinvited at the last minute.