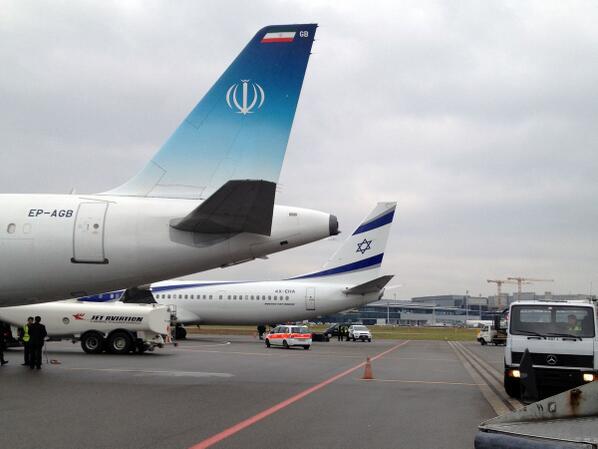 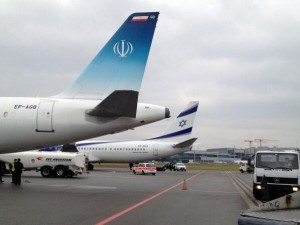 Zurich air traffic controllers may have inadvertently succeeded where diplomats have failed for decades: to bring Israelis and Iranians together.

As the jets of Iranian President Hassan Rouhani and Israeli Prime MinisterBenjamin Netanyahu arrived in Switzerland today to take their leaders to the World Economic Forum, their planes were parked side-by-side under cloudy skies.

Rouhani, the first Iranian leader in a decade to visit Davos for the World Economic Forum, will be looking for deals to boost an economy that shrank more than 5 percent in the last fiscal year through March under the weight of international sanctions. He’s due to address the forum in the ski resort tomorrow during a session called “Iran in the World.”

Netanyahu, among the most outspoken critics of the Iranian government, is seeking to keep the sanctions in place. He has called Rouhani a “wolf in sheep’s clothing” and urged the world to be wary of his “charm offensive.”

As Netanyahu and Israeli President Shimon Peres were whisked into helicopters waiting for them, the journalists and staff from both planes took photos of each other.

An Israeli journalist shouted out in English “How Are You?” to the Iranians at the top of the aircraft stairs. One of them responded, “Fine, thank you. How are you?”

Rouhani took office in August after winning an election on a pledge to end the country’s isolation under his predecessor, Mahmoud Ahmadinejad. During his first 100 days, he broke taboos by speaking on the phone with his U.S. counterpart Barack Obama.

Zurich airport officials weren’t taking credit for the Swiss encounter. The place where the planes were parked is reserved for heads of state during the World Economic Forum, said airport spokeswoman Sonja Zoechling.