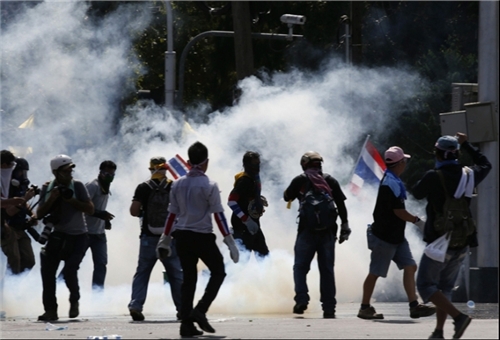 Calculating the costs of Thai protest

Increasing unrest in Thailand is hitting southeast Asia’s second-largest economy. Nearly $4 billion has left the country since November, as investors rush to sell off Thai assets and currency.

Thailand have been politically turbulent for the last ten years, but the economy has until now been more or less resilient to the spurts of violence. Unrest has led to a political shuffle with the country led by six different Prime Ministers since 2006 and has experienced 18 separate coups.

Shopping centers have been burned to the ground, airports attacked, and government services have become nearly non-existent during times of protest. Schools and universities are closed as dissidents pledge to “shutdown” the city by blocking traffic and disabling power. Protestors have promised to bring mayhem to the country’s capital city of 12 million people.

Global funds have withdrawn $3.9 billion from Thai bonds and stocks since the beginning of November, with the Thai baht losing 3.5 percent, Bloomberg data shows.

In 2012, net inflow into emerging Asian equity and bond funds stood at $44.2 billion, and in 2013, it had pared down to $3.6 billion, according to EPFR data, Bloomberg News reported.

“There is no reason to buy the baht or Thai assets while the protests continue,” said Shigehisa Shiroki, a chief trader on emerging Asian markets at Mizuho Bank Ltd in Tokyo told Bloomberg News.

“The longer the unrest lasts, the more foreign investors will be reluctant to buy Thai assets,” Shiroki said.

Investor uncertainty on buying baht will at least last through February 2, when an election will be held. But the opposition, led by Suthep Thaugsuba has said protests will continue until the current Prime Minster steps down and is replaced.

Prime Minister Yingluck Shinawatra is the sister of Thaksin Shinawatra, the politician who was convicted of corruption in absentia, and she has pledged to provide him with amnesty.

The protests have been growing in strength since November. Even though hundreds of thousands have come onto the streets against the government, polls suggest the ruling party will continue in power.

Fiscal policy is impossible because the government isn’t running.

“It’s clear the economy is slowing down and you cannot rely on fiscal policy anymore because we don’t really have a government right now,” said Kampon Adireksombat, senior economist at TISCO Securities in Bangkok told Reuters.

The government has been paralyzed in its efforts to pass a 2 trillion baht infrastructure investment bill, as violent protests have interrupted meetings.

Asian currencies are having a tough time, as 2013 has been the region’s worst year on forex markets since 2008. Investors hit Thailand’s baht, Indonesia’s rupiah, and India’s rupee, over concerns the US Federal Reserve would start tapering its stimulus program.

The Thai baht has been rapidly declining, and has slid more than 15 percent over the last year, also on concerns US monetary policy could spell more capital flight from emerging markets.

Tourism, which makes up about 7 percent of the country’s gross domestic product, took a big hit in 2013, as Chinese tourists, the country’s biggest foreign tourist demographic, stayed clear of the country as protests erupted. Dwindling tourism has ripple effects from the airline and hotel industry to infrastructure investment.