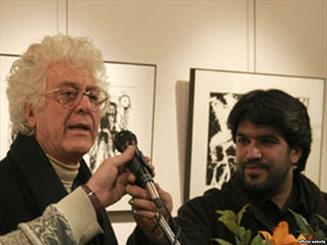 TEHRAN, Jan. 21 (MNA) – A number of prominent Iranian artists, musicians, art critics and officials gathered in Tehran’s Boom Gallery to attend the opening ceremony for an exhibition of paintings by Gholamhossein Nami.

Boom Gallery is holding a retrospective for Nami to review his 50-year career in art with the exhibit entitled “White Passion”, in which a selection of Nami’s works from over the past fifty years were put on display on Monday.

However, the opening ceremony took place on Friday with short speeches delivered by several participants.

Speaking at the ceremony, Moradkhani said, “I knew Master Nami and his paintings for many years. I first got to know his works and later himself. His works have always adapted to his time, and that is why his works always have something to tell visitors even after many years.

“Moreover, one cannot ignore the oriental identity of his paintings,” he added.

Kalantari was next and talking about the time he and Nami were students said, “Nami used to hold exhibits when we were students in the Academy of Fine Arts. We also held exhibits together in Switzerland and the United States.”

“All the beauty of contemporary paintings is in its variety. Nami enjoys a high position in the art of Iran. His white canvas, his works filled with flowers and his calligraphy works are among his most famous artworks.

In a note written on the introduction page of the catalogue, Sami-Azar has called Nami a true modernist who has played a major role in promoting the value of modern aesthetics in Iran.

The exhibit centers on three major periods displaying 26 paintings and two sculptures, some of which are being shown for the first time.

His third collection is paintings mixed with the material of clay.

Nami has received several awards during his 50-year career including “The Encyclopedia Iranica” awards, from Columbia University in Canada in 2005.

“Golden Palm of Europe” award from the Academy of Europe in Italy (1987), “Oscar d’Italia 1985” award from the Italian Academy (1985) , “Statue of Golden Flame” award from the International Parliament of USA (1984) and French National Prize award of “Cagnes-Sur-Mer Festival” from France (1970) are among other awards that he has received.

The exhibit will be running for about two months at the gallery located at 11 Armaghan Alley, Vali-e Asr Ave. near Niayesh Highway.