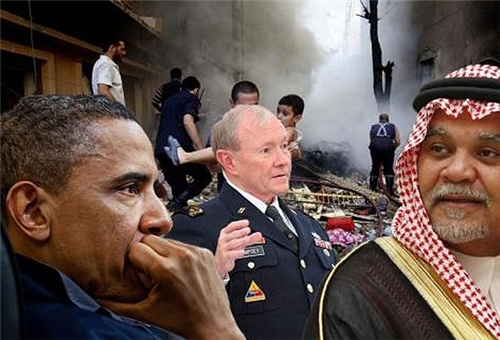 TEHRAN (FNA)- A new study by former UN weapons inspector Richard Lloyd, and MIT Professor Theodore A Postol, presented new details to the evidence about the war crime in Syria that almost led to a NATO – led military aggression and a full scale regional war in the Middle East.

On 7 October 2013, nsnbc international published a detailed analysis of the chemical weapons attack in the Damascus suburb East Ghouta, on 21 August 2013. The report detailed the name of the Saudi Arabia and US commanded Al-Qaeda brigade and the name of the commander who gave the direct order. The report placed direct command responsibility with the US Chairman of the Joint Chiefs of Staff, General Martin Dempsey and other Top US and Saudi officials.

A new study by former UN weapons inspector Richard Lloyd, and MIT Professor Theodore A Postol, corroborates the analysis and adds additional detail to the evidence about the war crime, that almost led to a NATO – led military aggression and a full scale regional war in the Middle East, nsnbc reported.

The report by Lloyd and Bristol, published under the title ”Possible Implications of Faulty US Technical Intelligence in the Damascus Nerve Agent Attack of 21 August 2013″, documents that:

The improvised munitions that were used in the nerve agent attack in the Damascus suburb of East Ghouta had a range of about two kilometers.

Llloyd and Postol agree with the UN’s findings about the range of the munitions that were used.

The munitions could not possibly have been fired from the heart, or from the edge of the Syrian government controlled area, as shown in the map published by the White House on 30 August 2013.

This mistaken intelligence could have led to an unjustified military action based on false intelligence.

A proper vetting of the fact that the munition was of such short range would have led to a completely different assessment of the situation, from the gathered data.

Whatever reasons for the egregious errors in the intelligence, the source of these errors needs to be explained.

If the source of these errors is not identified, the procedures that led to this intelligence failure will go uncorrected, and the chances of a future policy disaster will grow with certainty.

As to the reason for the egregious errors, the nsnbc report from 7 October details among others, that the UN inspectors who were gathering the evidence were in the custody of “security guards” who had been handpicked by Liwa-al-Islam supreme commander Zahran Alloush, and that the inspectors only were granted safe passage and access to the area after agreeing to these terms.

The nsnbc report also documented that it was Zahran Alloush who had given the order to deploy the chemical weapons on 21 August. It is noteworthy, that the nsnbc report from 7 October also, clearly states, that Zahran Alloush has been working for the intelligence service of Saudi Arabia since the 1980s, that Alloush was arrested in Syria in the 1990s, that he was freed from a Syrian prison as part of a general amnesty, granted by the Syrian government in 2011. Immediately after his release, the Intelligence Service of Saudi Arabia funded Alloush, to such a degree, that he could establish Liwa-al-Islam, from being a one-man enterprise to becoming one of the most high-profile Al-Qaeda brigades in Syria within less than a year. There is no question about, that Liwa-al-Islam is a mercenary corps, funded and armed by Saudi Arabia and the US.

The proper vetting of the intelligence. The report by Lloyd and Postol implies that an “error” was made when vetting the munitions. Leaving alone the fact that the experts were in the custody of the perpetrators when the evidence was gathered, the nsnbc report from 7 October 2013 reveals a much deeper reason for the implied “intelligence failure”.

The nsnbc report details among others, that the Jabhat al-Nusrah and Liwa-al-Islam commanders, including Alloush, were operating in liaison with US Special Forces and US intelligence in the Jordanian town of Al-Mafraq and at the Ramtha Air Base in Jordan.

The US Chairman of the Joint Chiefs of Staff, Army General Martin Dempsey, visited Al-Mafraq a week prior to the attack and left again on 19 August, only days before the chemical weapons were launched.

The report also details, that Dempsey’s visit coincided with the delivery of new, more advanced weapons to the insurgents by Saudi Arabia and the US via Jordan, that one convoy and brigade, leaving the Ramtha Air base with a delivery of advanced weapons to Damascus was literally “wiped out” by the Syrian Army, and that Alloush and other top-commanders had been given the “explicit order to hold the Jobar entrance to Damascus at any cost”.

About “mistaken intelligence” leading to an unjustified aggression. The nsnbc report from 7 October 2013 documents with all possible clarity, that the push for a military aggression from the sides of the United States, the United Kingdom, France and others, was not based on flawed intelligence.

The Syrian Arab Army seized 281 barrels with chemicals from insurgents at a farm in Banias, Tartus.

Nsnbc already published reports in late June, early July 2013, stressing that Palestinian intelligence sources were aware of plans to launch a chemical weapons attack, to be blamed on the Syrian government, to justify calls for a military intervention in August/September 2013. That is, about one and a half months before the attack was launched.

The report also refers to an investigation by the director of the Canadian Centre for Research on Globalization, Michael Chossudovsky, who documented that US Naval vessels began deploying already before the attack on 21 August.

A cohort of other evidence, which is corroborated by Lloyd’s and Postol’s report. The report by Lloyd and Postol adds to amount of evidence, documented in the nsnbc report from 7 October 2013, which placed the direct military responsibility for the attack, and which placed the direct political and command responsibility for the attack with top US and Saudi Officials, leading directly to the top levels of the Saudi Intelligence Service and Interior Ministry, the Pentagon, the CIA, and the White House. The report by Lloyd and Postol is flawed in one respect, which is that their report implies “an intelligence failure”.