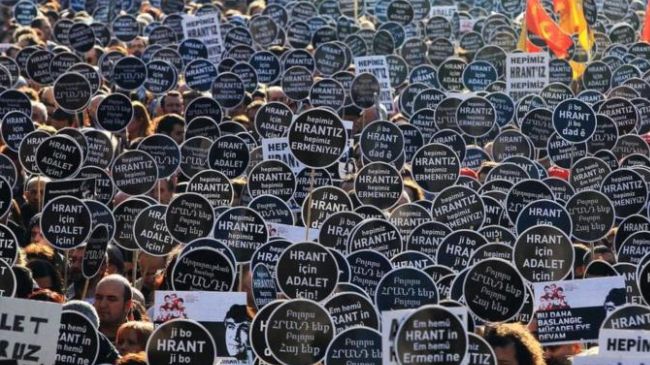 A rally is staged in Istanbul on January 19 every year to mark the anniversary of journalist Hrant Dink’s killing.

Several thousands of protesters have gathered in the Turkish city of Istanbul’s iconic Taksim Square to commemorate a Turkish-Armenian journalist who was murdered seven years ago.

Protesters took part in the rally on Sunday, amid a heavy presence of riot police, to mark the anniversary of Hrant Dink’s killing, demanding justice in the case.

Fifty two-year-old Dink, who was a leading member of Turkey’s Armenian community, was killed by a seventeen-year-old teenager outside the offices of the Armenian weekly Agos on January 19, 2007.

A similar demonstration is staged every year on January 19, usually turning into a general call for justice.

“I am not here only for Hrant. For more than 100 years, there has been so much injustice in Turkey… and it is not only Armenians who have been affected,” Turkish historian Saro Dadyan said.

Dink had campaigned for reconciliation between Turks and Armenians for years, though Turkish nationalists were completely outraged after he called the alleged mass killing of Armenians during WWI “a genocide.”

Dink’s supporters claim that those behind his killing have been protected by the government, calling for a deeper probe into the case.

On Saturday, Turkish police fired teargas and used water cannon to disperse hundreds of demonstrators protesting against controversial plans to impose curbs on the Internet in Istanbul’s iconic Taksim Square.

The bill introduced by the Turkish premier’s ruling Justice and Development Party (AKP) will give the government the authority to keep records of all user activities for up to two years.