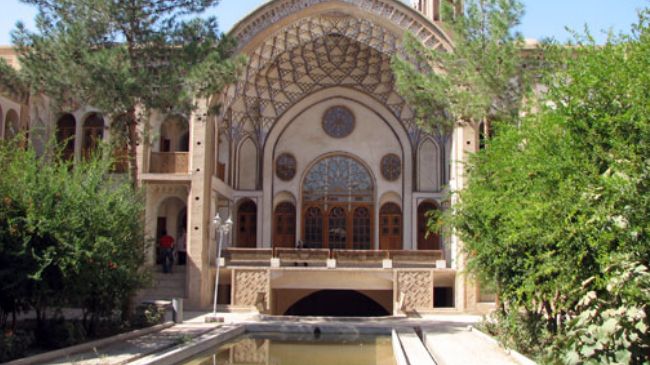 Ameries Historic House is located in the Iranian city of Kashan in Isfahan Province as one of the earliest settlements of the ancient people.

The house, which is also famed as the Ameries Mansion, dates back to Zand dynasty at 18th century built for Agha Ameri, the governor of Kashan, who was responsible for maintaining the security of the route between Tehran and Kerman.

The current structures go back to the Qajar era at mid-nineteenth century when they were rebuilt by Saham al-Saltani Ameri.

Due to a deadly earthquake toward the end of 18th century, a lot of structures collapsed in Kashan. Many of renowned historical buildings of the area were rebuilt at the late 18th as well as 19th century.

The mansion has got seven courtyards built for seven independent families Covering an area of 9000 square meters. There are more than 80 rooms in it.

The unique and magnificent architecture of the Ameries structures such as fascinating decorations, porches, ponds, courts and gardens make them spectacular edifice.

The materials used in the buildings include bricks for construction of the main structure, mud and straw for insulation and facade, gypsum for decoration facade and interior, mirrors for making inner spaces (particularly ceilings) more beautiful, thick wooden doors for protection.

It is believed that on its completion the Ameries Mansion will turn into one of the most desirable points of interest for tourists in Kashan after the Fin Garden.

Completed in 1590, the Fin Garden is the oldest existing garden in Iran which dates back to the Safavid dynasty.

Fin Garden as a historical Persian heritage comprises a large garden and Fin Bath where the Qajar chancellor Amir Kabir was murdered during an assassination planned by the King Nassereddin Shah’s men in 1852.

The Garden was listed as a national property of Iran in 1935 and was inscribed in the UNESCO World Heritage Site in 2011 along with 8 other Iranian heritage.