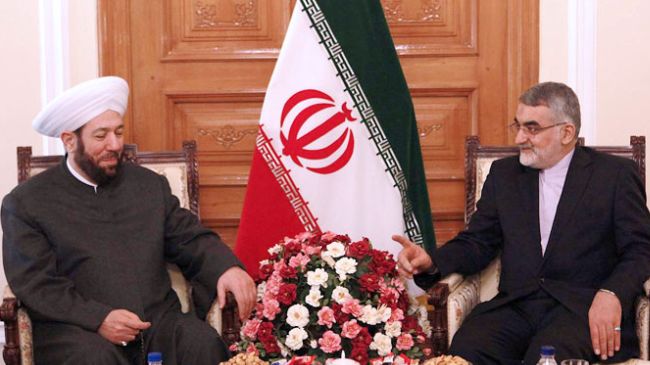 “Takfiri groups are used as a tool by enemies of Islam and they seem to lack a true understanding of Islam,” head of the Majlis National Security and Foreign Policy Committee, Alaeddin Boroujerdi, said in a meeting with Syrian Grand Mufti Sheikh Ahmad Badreddin Hassoun in Tehran on Saturday.

He highlighted the role of clerics in reinforcing the resistance of the Syrian nation as well as fostering unity in the Arab country, and warned against plots by enemies to incite religious and sectarian rifts among Muslims.

Boroujerdi also praised the resistance of the Syrian people against the foreign-sponsored crisis in the country.

Hassoun, for his part, praised Iran’s support of Syria and described the Islamic Republic as a powerful country.

The Syrian Grand Mufti also underlined the need for unity of the Islamic world in the face of enemy ploys.

In recent years, Takfiris, believed to be funded by Saudi Arabia, have been conducting numerous acts of terrorism across the Muslim world, including in Syria, killing thousands of civilians and undermining regional security.

Syria has been gripped by deadly unrest since March 2011. According to figures released by the United Nations, over 100,000 people have been killed and millions displaced due to the turmoil.