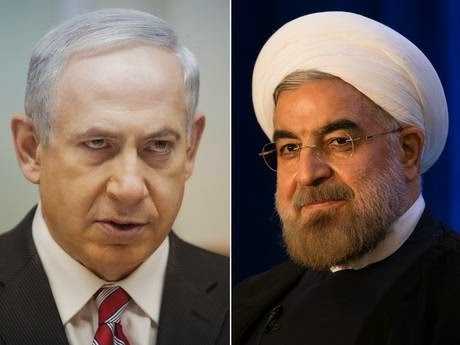 Netanyahu says if Rouhani agrees to recognize Israel, he would consider meeting with him

Prime Minister Binyamin Netanyahu may not meet with Iranian President Hassan Rouhani at the World Economic Forum in Davos, Switzerland next week, but if Tehran says it is willing to recognize Israel, Netanyahu might consider a meeting.

“If Rouhani said ‘we recognize the Jewish state. We, Iran, are prepared to have peace with Israel, Israel would be here forever,’ well that would peak my interest, in Davos or anywhere else,” Netanyahu told Canadian CTV News on Thursday, when asked whether or not he would be willing to meet with the Iranian president.

Ahead of Canadian Prime Minister Stephen Harper’s visit to Israel next week, Netanyahu also addressed criticism against his staunch vocal support of Israel, saying the critics are “out of sync” with the region.

The premier asserted that the Middle East is undergoing change in which “many of the Arab countries see Israel not as an enemy, but as a friend,” despite the fact many don’t say so openly.

“When Canada says ‘Israel is our friend,’ they’re not necessarily alienating the Arabs, quite the contrary,” the prime minister said.

Inviting Harper’s critics to the Middle East to see the changing tides, Netanyahu said many in the Arab world understand Israel is in league with them against the possibility of a nuclear Iran, as well as against a recent wave of Islamic radicalism that has swept the region with the rise of the Muslim Brotherhood in Egypt.

Discussing the peace talks with the Palestinians, Netanyahu insisted that “nobody wants peace more than Israel, because we’ve suffered the brunt of wars, and the war between wars which is terror. We pray for peace, we yearn for peace, we work for peace.”

Netanyahu also stressed the importance of maintaining Israel’s security in any future accord.

“The last thing we want to do is just walk out and have them use that Palestinian state to attack what remains of Israel. I think this is the pivot of that debate,” he said.

The premier expressed confidence the issue of settlement construction, for which Israel suffered condemnation worldwide, will be resolved in the negotiations.

“For 47 years, between 1920 and 1967, we were attacked from the territories when we weren’t there. There were no settlements, there were no soldiers there, and yet we were attacked for nearly half a century,” he said, stressing that the issue remains the Palestinians’ refusal to recognize Israel as a Jewish state.