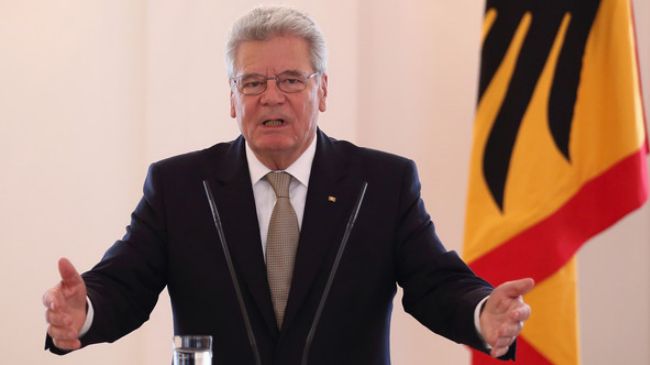 German President Joachim Gauck says the implementation of the first step of an interim deal clinched by Iran and the six world powers in Geneva brings hope of the settlement of the dispute over Tehran’s nuclear energy program.

The interim Geneva deal finalized following nuclear talks between Iran and the five permanent members of the UN Security Council – Russia, China, France, Britain, and the US – plus Germany in November is a promising sign, Gauck said in his address to foreign diplomats and ambassadors residing in Berlin on Tuesday evening.

It can be the first step towards finding a final solution to the standoff over Iran’s nuclear activities, he added.

He also called on all sides to stand committed to their obligations, noting that the successful implementation of the Geneva nuclear agreement requires the restoration of confidence between the parties involved in the nuclear talks.

On Sunday, Iran and the six world powers finalized an agreement on ways to implement the Geneva nuclear deal, which the two sides struck in the Swiss city of Geneva on November 24, 2013, from January 20.

Iran’s Deputy Foreign Minister for Legal and International Affairs Seyyed Abbas Araqchi said once Iran begins to implement the Geneva deal, the sextet of world powers will begin to ease sanctions on Tehran.

He added that the other side will release USD 4.2 billion in Iranian frozen assets in eight stages and Iran, in return, will oxidize its 20-percent-enriched uranium.