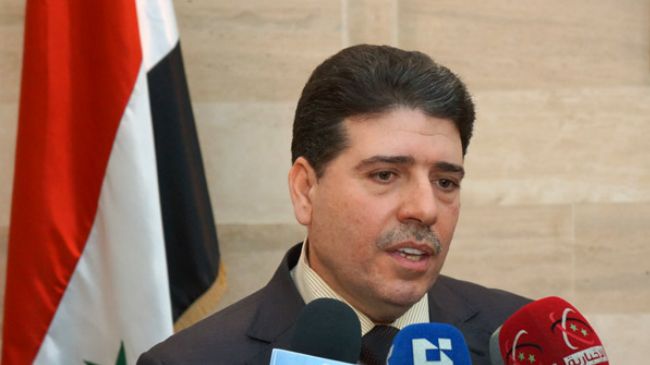 Syrian Prime minister Wael al-Halqi says Iran’s involvement in the upcoming peace conference aimed at ending the crisis in Syria will be in the interest of the entire Middle East.

In a Wednesday meeting with Iranian Foreign Minister Mohammad Javad Zarif in Damascus, the Syrian premier pointed to the Islamic Republic’s important role in the Middle East, stressing that Iran’s attendance in the Geneva II conference would benefit the entire region.

After several delays, the meeting, dubbed Geneva II, is scheduled to open in the Swiss city of Montreux, near Geneva, on January 22. The international event is designed to pave the way for the resolution of nearly three years of foreign-backed turmoil gripping Syria.

The Syrian prime minister further expressed gratitude to the Islamic Republic for standing by the Syrian nation in the face of extremism and terrorism, describing Tehran-Damascus ties as part of the Middle East’s history.

The Iranian foreign minister, for his part, reaffirmed the Islamic Republic’s support for the Syrian government in fighting the foreign-sponsored terrorism, extremism and violence in the Arab country.

“The more time passes, the more it becomes clear that the view on fighting extremism has been a correct one, and more countries are inclined toward this view,” added Zarif.

The Iranian Foreign Minister travelled Syria following visits to Lebanon, Iraq and Jordan. Zarif’s Middle East tour is in line with Iran’s active regional diplomacy and comes on the heels of the top diplomat’s previous regional tours which took him to Iraq, the United Arab Emirates, Kuwait, Oman, and Qatar.