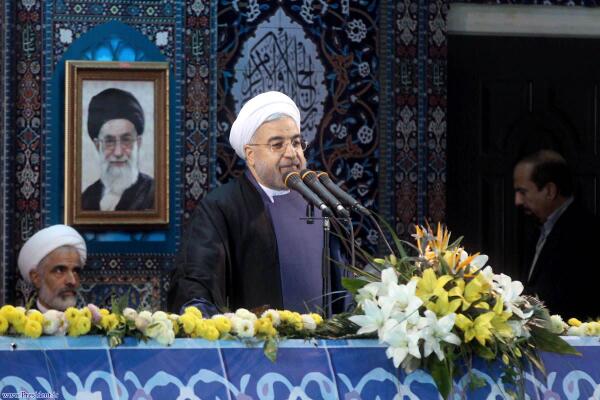 Tehran, Jan 14, IRNA – President Hassan Rouhani said Tuesday that Geneva deal has shown submission of the western powers to the Iranian nationˈs nuclear rights and means breaking of the unjust sanctions imposed against the country.

President Rouhani made the remarks while addressing a large crowd of people in the southern provincial capital city of Ahvaz where he arrived earlier Tuesday morning.

Noting that implementation of the Geneva deal will start within coming days (January 20), the President said the “Geneva deal means international community has recognized Iran’s right to make use of peaceful nuclear technology which is the result of bravery and strives of young Iranian scientists.”

“Geneva deal means breaking the barrier of unjust sanctions which were imposed on the peace-loving people of Iran.”

President Rouhani stressed that his government is committed to pursue the rights and interests of the Iranian nation.

“We will determine our international relations with the rest of the world based on the national interests,” said the President.