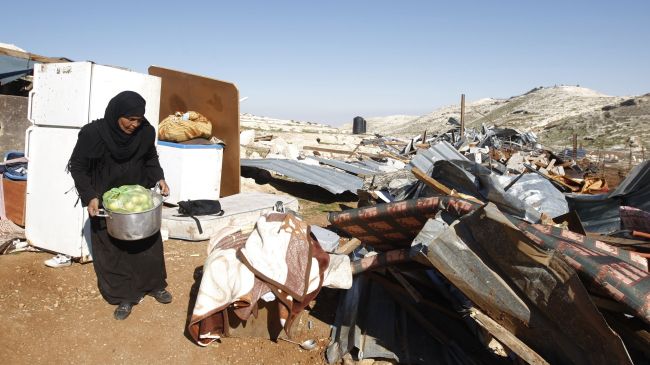 The Israeli regime has seized tents provided by the United Nations to a group of displaced Palestinians after their homes were demolished in the occupied West Bank.

Palestinian sources said on Monday that the tents were given to shelter three families in cold weather.

The United Nations Office for the Coordination of Humanitarian Affairs in the occupied Palestinian territories (OCHA) said that it gave the tents in an emergency response to the Bani Manieh families from Jiftlik in the Jericho district, also known as Ariha, after Israeli troops destroyed their homes last week.

The Tel Aviv regime claimed that the area was a military training zone.

The demolitions came despite earlier warnings from Human Rights Watch, saying that Israel’s eviction of Palestinian families is illegal, discriminatory and a war crime.

In 2013, the Israeli regime forcibly displaced more than 1,100 Palestinians from the West Bank and demolished their homes.

The report comes as Israel continues with its illegal settlement construction on Palestinian land.

Much of the international community regards the Israeli settlements as illegal because the territories were captured by Israel in a war in 1967 and are hence subject to the Geneva Conventions, which forbids construction on occupied lands.