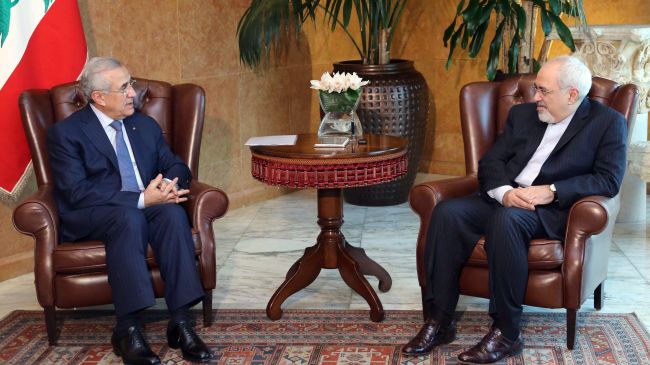 Zarif made the remarks in a meeting with Lebanese President Michel Suleiman in Beirut.

In the meeting, the two officials reviewed expansion of mutual relations, current developments in Lebanon as well as the humanitarian crisis in Syria.

Zarif conveyed the greetings of Iranian President Hassan Rouhani and expressed the hope to broaden cooperation in political, economic and cultural fields.

The Islamic Republic of Iran believes that there is no barrier on the way of expansion of relations and cooperation between the two countries and they can even broaden their scope of cooperation at regional level, Zarif said.

Iran is determined to restore peace and stability in the entire region, he said.

On current developments in Lebanon, he expressed the hope that the countryˈs problems to be solved through contribution of all political and religious groups.

Unity is the key word in restoring the countryˈs stability, he said.

He thanked for identifying and arrest of those involved in bomb explosion near Iranian Embassy in Beirut.

On the achievements in Geneva accord between Iran and G5+1, he said the invaluable results of the meeting have disappointed the Zionists as they always seek to trigger crisis in the region, he said.

The Syrian president, for his part, conveyed his warm greetings to the Supreme Leader of the Islamic Revolution Ayatollah Seyed Ali Khamenei and President Hassan Rouhani and expressed regret over terrorist attack to Iranian Embassy in Beirut and underlined that his government is determined to follow up the case.

He expressed the hope that the upcoming international conference on Syria would help resolve the humanitarian crisis in Syria.

He highlighted contribution of the Lebanese government to develop unity between various political and religious parties in Lebanon.