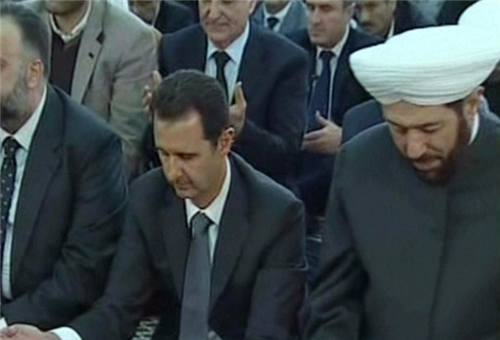 TEHRAN (FNA)- Syrian President Bashar al-Assad participated in a religious ceremony in a Damascus mosque on the occasion of Prophet Mohammad’s (PBUH) birthday.

It added that the performed al-Isha prayer, led by Imam Abdul-Fatah al-Bizim, the Mufti of Damascus.

Minister of Endowments Mohammad Abdul-Sattar al-Sayyedm talked about the occasion as he said that the holy prophet’s life which was full of mercy, tolerance, human fraternity and calling for God through good discourses.

“The Syrian people see in the leadership of President Assad as a prevention of bloodshed and reconstruction, and if the world nations have gathered in Geneva, there would be nothing, but what the Syrian people want and wish,” the Minister said.

Assad’s last public appearance was on October 15 in a Damascus mosque for al-Adha prayers.