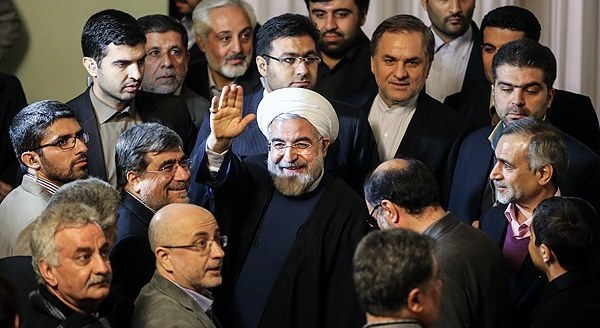 Art without freedom is nonsense: Rouhani

TEHRAN, Jan. 11 (MNA) – Iranian President Hassan Rouhani said that creativity is developed in the light of freedom and that art without freedom is nonsense.

President Rouhani made the remarks at Tehran’s Vahdat Hall on Wednesday evening during a meeting attended by a large number of artists, literati, cineastes and groups of presidential advisors and officials.

“The artists have come together to express their hatred toward violence and extremism in the world,” Minister of Culture and Islamic Guidance Ali Jannati said during the meeting.

He also said that those who are working in the fields of art and culture are fearful of ‘the security outlook’ and added, “Art and culture will be fruitless in such an atmosphere.”

“We have tried to restore trust among the artists by   appointing managers who love the Iranian artists’ community, transparency and honesty are our mottos and we are seeking democracy in art,” he stated.

He said the Iranian House of Cinema, which was disbanded by former officials of the Culture Ministry under Mahmoud Ahmadinejad’s administration, reopened a short time after Rouhani won the presidential election in June 2013, and that his colleagues will try to help the art and cultural guilds to develope.

The meeting went on with speeches by the representatives of the guilds, most of them asked the president to improve the security outlook, which has dominated the field of art and culture in Iran over the past eight years.

They also appealed for lifting governmental controls on books, music, cinema and art, and asked for the return of art and culture figures who have been isolated over the past eight years.

“Art without freedom is nonsense and creativity is developed in the light of freedom,” President Rouhani said.

However, he added that traditions and the level of understanding in a society determine what art will be. “Each government has its own redlines. But, these redlines must be sufficiently transparent and legitimate so as to prevent the tyranny of individuals’ taste,” he said.

“There is a direct link between art and freedom. Without freedom real artworks can never be created, any security outlook on art would cause the blossom of art to wither,” he stated.

He added that the government would exercise supervision over culture and art in a way that should never thwart artists’ plans.

“The government tries to lessen its involvement in economy and culture… we should know that art is not a threat and artists do not put the security of the country in danger. Let us trust in art and artists. A security outlook toward art is big security mistake,” he said.

Refering to a ‘yellow card’ the Iranian parliament gave Culture Minister Jannati last week, he said, “This government will fulfill all the promises it made during the presidential election campaign. This government has no concern about yellow cards. We are proud of Mr. Jannati as a defender of the artists’ rights and freedom of speech.”

Expressing his regret over the shutdown of the Tehran Symphony Orchestra and Iran’s National Orchestra, President Rouhani said, “The orchestra will be restored in the upcoming months even if the culture minister receives a yellow card again!”