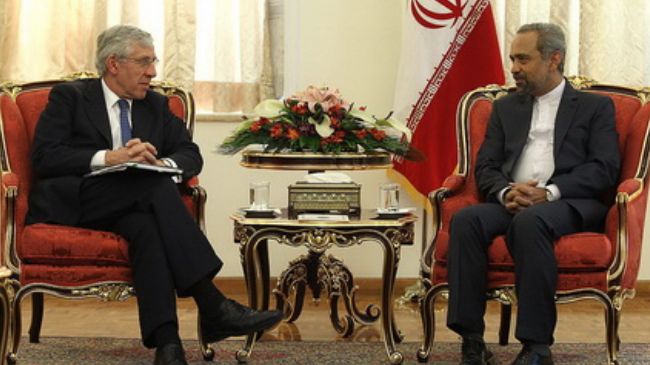 Iranian President Hassan Rouhani’s chief of staff has called on all countries to step up efforts to combat terrorism.

Highlighting the “critical situation” in Syria, Mohammad Nahavandian urged all states to roll up their sleeves and fight the scourge of terrorism.

“The countries backing terrorists need to withdraw their support because the escalation of terrorism will be to the detriment of the region and the sponsors of terrorism alike,” he noted.

“Iran has always been the flag-bearer of the campaign against terrorism and extremism in the region,” he further said, referring to President Rouhani’s proposal of World Against Violence and Extremism (WAVE) which was unanimously adopted as a UN resolution.

The Iranian official made the remarks in a meeting with Jack Straw, the former British foreign secretary and present member of the UK Parliament, in Tehran on Wednesday.

Straw, for his part, said terrorism is a common concern for all countries, especially those of the European Union, and called for collective support for the UN resolution on WAVE.

Under the UN resolution adopted in accordance with the WAVE proposal, the General Assembly would urge member states to take “appropriate measures to strengthen universal peace and to achieve international cooperation in solving international problems of an economic, social, cultural, or humanitarian character.”

The resolution also encourages “respect for human rights and for fundamental freedoms for all without distinction of any kind such as race, color, sex, language, religion, political or other opinions, national or social origin, property, birth, or other status.”