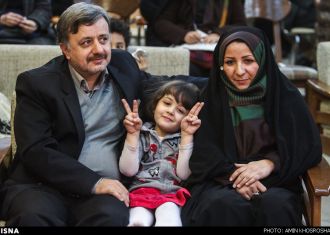 TEHRAN – The Mashhad-based Afghan poet Mohammad-Kazem Kazemi was paid tribute during a ceremony held by the Oj Artistic and Media Organization in Tehran on Tuesday.

Kazemi, who attended with his wife and little daughter at the ceremony, said that he came to the event with his family to show a positive image of Afghans in Iranian media.

“There is rarely a positive view about the Afghan nation in Iran and I hope that Iranians show respect to not only the Afghan cultural figures and elites but also other people from the neighboring country,” Kazemii mentioned during the event.

“I was introduced to Kazemi during 1990s and we have so many common friends. He is an innovative poet, who reflects hope in his poetry,” Salehi said during the event.

Mohammad-Kazem Kazemi, 36, is a notable contemporary Afghan poet, author, literary critic and a book editor by profession. He has authored many books on Persian literature and Afghan poetry. His poetry collection “Window” has been published for the fourth time in Iran and is considered to be the most famous poetry anthology.