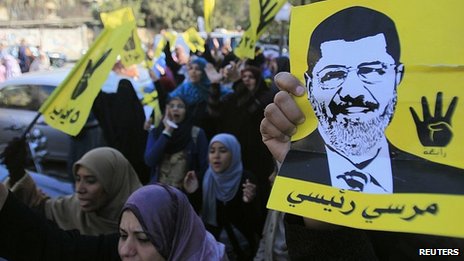 Egypt’s deposed President Mohammed Morsi has arrived at a court compound in Cairo amid tight security for the resumption of his trial, reports say.

Mr Morsi and 14 other Muslim Brotherhood figures are accused of inciting the killing of protesters outside the presidential palace in December 2012.

He was removed by the army last July after demonstrations against his rule.

His supporters have since held regular protests calling for his reinstatement.

Last Friday at least 11 people died in clashes between police and pro-Muslim Brotherhood demonstrators across Egypt.

A helicopter carrying some of the defendants arrived at the National Police Academy complex in Cairo for the hearing early on Wednesday, reporters said.

Security was tight at the compound and Egyptian media said thousands of police were on alert.

The deposed president also faces several other charges ranging from fraud to colluding with foreign militants in a terrorist plot.

He is due to appear in court again at the end of January, accused with some 130 others of murdering policemen during a mass breakout from a Cairo prison in January 2011 shortly before the overthrow of President Hosni Mubarak.

Human rights groups have dismissed some of the allegations against him as preposterous.

Egyptian officials insist he will be given a fair trial but lawyers trying to defend Mr Morsi say they have been denied access to him.

Speaking from behind bars, he insisted he was still the president and was being held against his will. He also refused to wear a prison uniform.

Some Egyptian journalists responded with calls for his execution.

Although Mr Morsi won the presidency in a democratic election, he fell out with key institutions during his 13 months in power.

The interim government has since cracked down on the Muslim Brotherhood, classifying it as a terrorist organisation and arresting thousands of members. At least one thousand people have been killed in clashes.

Mr Morsi’s supporters say he and other senior Brotherhood leaders are the victims of politically motivated prosecutions.