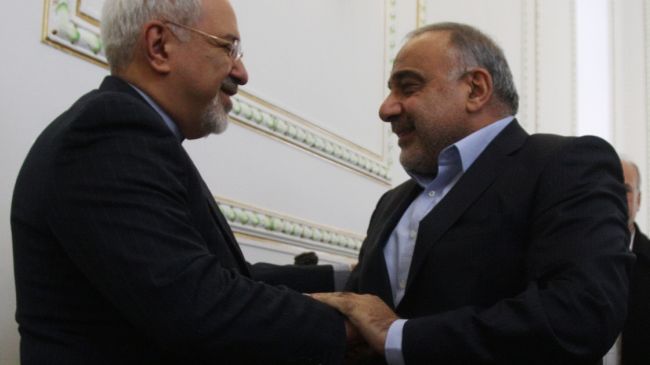 Iranian Foreign Minister Mohammad Javad Zarif says the fight against terrorism is the demand of people from of all walks of the Iraqi society and political currents.

In a meeting with member of the Islamic Supreme Council of Iraq Adil Abdul-Mahdi in Tehran on Tuesday, Zarif pointed to the gravity and seriousness of ongoing developments in the region, such as the campaign against terrorism and extremism in Syria and Iraq, and lauded the achievements of the Iraqi government in its campaign against terrorism as well as the pursuit and arrest of those responsible for terrorist attacks on Iranian nationals.

“Without doubt, the fight against terrorist acts is a demand sought by all strata of the Iraqi nation as well as different political blocs. The support and participation of the public and tribes in extending assistance to the Iraqi Army attests to this fact,” the Iranian foreign minister said.

Zarif also made reference to the good relations and cooperation between Iran and Iraq, calling for all-out enhancement of Tehran-Baghdad ties in line with the stability, security and progress of the two neighboring countries as well as the entire region.

Abdul-Mahdi, for his part, briefed the Iranian foreign minister on the ongoing operations of the Iraqi armed forces against al-Qaeda-affiliated militants, and described extremism and terrorism as scourges that require collective efforts of all regional countries to be eradicated.

He also pointed to the atrocities perpetrated by terrorist groups in various parts of Iraq, noting that many tribal people hit by insecurity and vicious acts have thrown their support behind the Iraqi military forces in their operations against terrorists.

The cities of Fallujah and Ramadi in Iraq’s western province of al-Anbar have been the scene of deadly clashes between the Iraqi army and al-Qaeda-affiliated militants over the past few days.

Iraqi military officials say that dozens of militants loyal to the so-called Islamic State of Iraq and the Levant have been killed in al-Anbar.

The violence broke out on December 30, 2013, when the army removed an anti-government camp in Ramadi. Authorities said the camp was used as “headquarters for the leadership of al-Qaeda.”