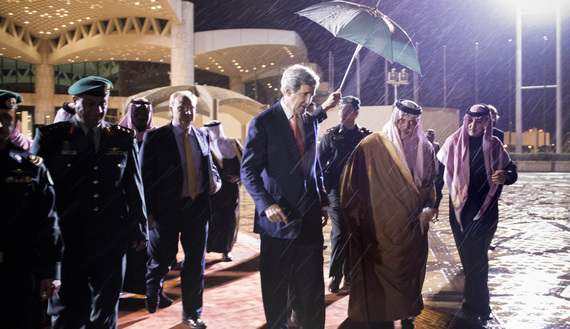 Saudi Arabia begins 2014 with plans for an assertive regional policy which include continuing the war in Syria until president Bashar al-Assad is deposed.

Nawaf Obaid, a fellow at the Belfer Center for Science and International Affairs at Harvard University’s John F. Kennedy School of Government and a senior fellow at the King Faisal Center for Research and Islamic Studies, and someone with deep knowledge of Saudi decision-making, writes athis week: “Of utmost importance for stability in the Arab world is the creation of a military force that can successfully deter Iranian activities and assist the Syrian rebels in bringing down the Assad regime in Damascus.

A military command based at its new headquarters in Riyadh will be established in 2014. The Gulf command will be built into a 100,000 standing military force with the Saudis contributing anywhere between 50,000 to 75,000 troops. The ultimate objective is to guarantee that this new global powerhouse bloc will effectively dominate and significantly alter the political, economic and security landscape of the MENA region.”