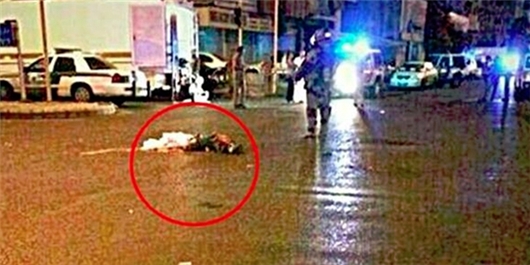 It is thought they may be the remains of a man who stowed away in an airplane’s wheel bay, RT reported.

According to police, the body that fell from the sky is alleged to have come from an airplane “from a plane’s landing gear,” most likely by a person trapped in the plane’s wheel bay.

“Police received a telephone call at 2:30 am from a witness reporting the fall of human remains at an intersection in Mushrefa neighborhood” in the Red Sea city, spokesman Nawaf bin Naser al-Bouq said in a statement.

A photo claiming to be of the body of the fallen human being appeared in Arabic media and social media.

Police are investigating the incident, but would not comment if the body parts are connected to a Saudi airplane that made an emergency landing early Sunday morning.

The plane, carrying 315 passengers from Iran’s city of Mashhad, was forced to make an emergency landing in Saudi Arabia’s Medina after the cockpit reported a malfunction in the rear wheel. Twenty-nine people were injured during the approach.

Cases have been documented in the past of people – in a desperate attempt to cross borders – climbing into the landing gear of a plane before takeoff. Few survive the freezing temperatures when the plane is in the air.

At the start of 2011, people around the world woke up to the news that some 3,000 red-winged blackbirds were tumbling from the skies above Arkansas, shortly before midnight on New Year’s Eve.

From the United States to Britain and Brazil, bizarre cases of birds, fish and even crabs dying en masse were reported at the start of 2011.

No scientific explanation exists on the phenomenon but explanations range from government conspiracy to lightning and fireworks.