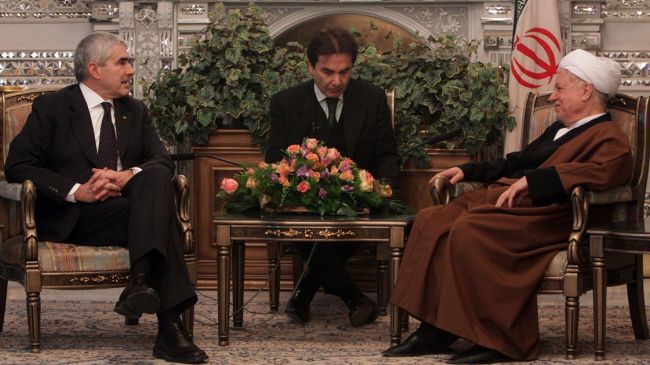 Terrorism virus will spread to US, West: Rafsanjani

Chairman of Iran Expediency Council Ayatollah Akbar Hashemi Rafsanjani says the Western-backed terrorism in Afghanistan and Iraq will spread to the rest of the world.

“This virus (terrorism) will not stay in the place it was produced and fostered, and the first opportunity in gets, it will spread everywhere,” Rafsanjani said in a Sunday meeting with Pier Ferdinando Casini, the chairman of the Italian Senate’s Foreign Affairs Committee.

He added that interaction and dialog are wise solutions to any political problem.

“The US cannot claim it has kept its geography immune from the threat of terrorists because the bodies of the American soldiers that are delivered to their families, are the result of a seed planted by extremist US governments in Iraq and Afghanistan,” the senior Iranian official said.

Rafsanjani criticized the performance of the US and Western countries in regional developments and said, “Crisis in the region will not benefit any state and be sure that it will not be resolved through military interference.”

Regarding the interim nuclear deal reached between Iran and six major world powers in Geneva, Rafsanjani said, “Mutual trust and respect and commitment to interim agreements are conditions for the continuation of negotiations.”

Iran and the five permanent members of the UN Security Council – Britain, China, France, Russia and the United States – plus Germany sealed an interim agreement in Geneva on November 24, 2013, to lay the groundwork for the full resolution of the West’s decade-old dispute with Tehran over its nuclear energy program.

The Italian senator, for his part, commended Iran for taking a positive stance on negotiations with the six powers and making efforts to win the international confidence.