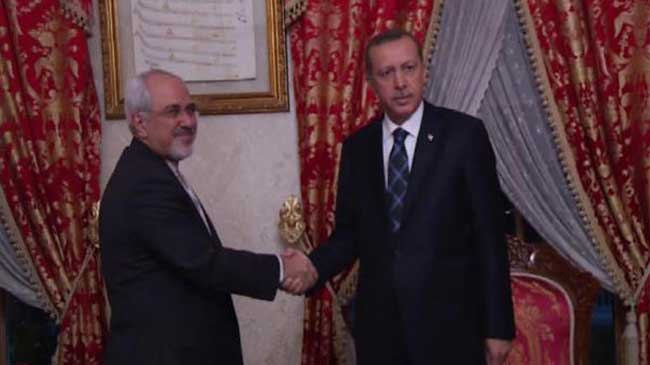 Iran and Turkey have underlined their determination to boost the value of their bilateral trade volume to USD 30 billion by 2015.

At a meeting between Iranian Foreign Minister Mohammad Javad Zarif and Turkish Prime Minister Recep Tayyip Erdogan in Istanbul on Saturday night, the two officials underlined the importance of enhancing trade cooperation between their respective countries to achieve that goal.

Zarif and Erdogan underlined the need to facilitate the activities of merchants and businesses and remove the existing obstacles in the way of mutual trade.

The Iranian top diplomat and the Turkish premier also touched upon the ongoing developments in the region and across the Muslim world, including in Syria, Iraq, Afghanistan and Egypt.

The two officials stressed that Tehran and Ankara must reinforce their mutual positions on the crisis in Syria and take joint steps to help resolve the issue through diplomatic channels.

Zarif has travelled to Turkey on an official visit upon the invitation of his Turkish counterpart Ahmet Davutoglu.