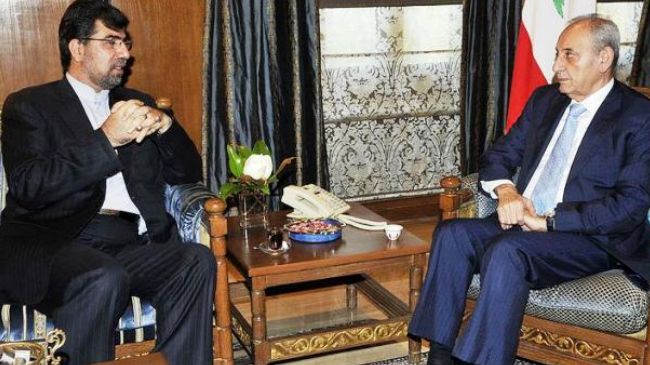 One mastermind behind all Lebanon attacks: Envoy

An Iranian diplomat says all recent terrorist attacks in Lebanon serve the interests of Israel.

In the meeting, the two discussed the security developments and the recent terrorist attacks in Lebanon.

On Thursday, at least five people were killed and more than 70 others injured after a powerful car bomb went off in the densely-populated Haret Hreik neighborhood in southern Beirut near the political bureau of Hezbollah resistance movement.

On December 27, 2013, several people, including former Finance Minister Mohamad Chatah, were killed in a car bomb attack near the parliament in Beirut.

The Iranian envoy also lauded the Lebanese nation, army and officials for their vigilance, saying they are aware that they should remain united at this juncture.

On November 19, 2013, two bomb attacks outside the Iranian embassy in the Lebanese capital killed 25 people and injured more than 150. Iran’s Cultural Attaché to Beirut Hojjatoleslam Ebrahim Ansari and the wife of another Iranian diplomat were among those killed.

On Wednesday, the Lebanese government confirmed the arrest of Majed al-Majed, the Saudi commander of the Abdullah Azzam Brigades which had claimed responsibility for the bombings

Hezbollah Secretary General Seyyed Hassan Nasrallah had announced on December 3, 2013 that Saudi Arabia was behind the bombings against the Iranian embassy, adding that he had no doubt that the Saudi intelligence agency has close links with the Abdullah Azzam Brigades.