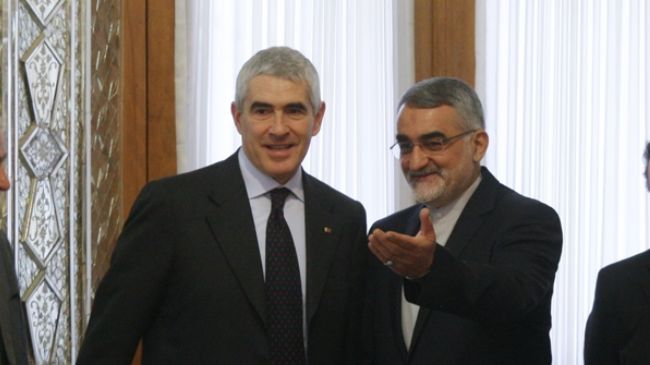 Italy has always stressed the presence of the Islamic Republic of Iran in talks on regional crises, including those in Iraq, Afghanistan and Syria, so Italy supports Iran’s presence in the Geneva talks on Syria, Pier Ferdinando Casini said.

Casini, who is the chairman of the Italian Senate’s Foreign Affairs Committee, made the remarks in a meeting with Alaeddin Boroujerdi, chairman of National Security and Foreign Policy Committee at Iran’s Majlis, in Tehran on Saturday.

He also described political negotiations as the solution to the Syria crisis.

Stressing that Iran is a highly significant country in the region, the senior Italian lawmaker said that Tehran and Rome enjoyed good political and parliamentary relations and that the Italian parliament welcomed the further development of ties with Iran.

Boroujerdi, for his part, pointed to long-standing friendly ties between Iran and Italy and said Majlis embraces the enhancement of political, economic and cultural relations with the European country. He said that forging good ties with world countries was among the top priorities of Iran’s policies.

He also stressed Tehran’s right to develop nuclear technology for peaceful purposes and said, “The Islamic Republic of Iran has always acted within the framework of the [Non-Proliferation Treaty] NPT and has never sought nuclear weapons and will not do so in the future.”

Regarding the developments in the Middle East, the top Iranian lawmaker said that dialog between Iran and European countries, including Italy, can contribute to the establishment and reinforcement of peace and stability in the region.