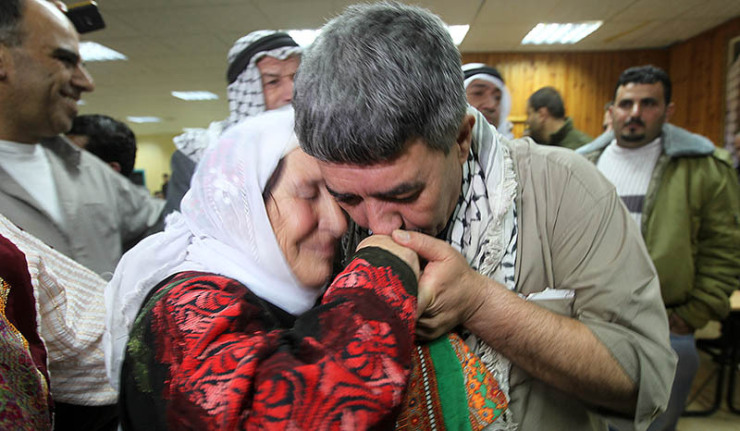 Relatives and Palestinian leaders celebrated early Tuesday after Israel released a third group of prisoners as US Secretary of State John Kerry prepares to return to the region to boost faltering negotiations between the two sides. Twenty-six prisoners were released in total, the majority into Palestinian territory in the West Bank.

The prisoners were the third batch of 104 detainees that Israeli Prime Minister Benjamin Netanyahu pledged to let go in four stages when the peace talks were revived in July.

The release shortly after 0000 GMT came after an Israeli court rejected a last-minute appeal by victims’ families.

At 2 am (0000 GMT Tuesday), 18 inmates passed through a West Bank crossing into Ramallah. They were driven to President Mahmoud Abbas’ headquarters for an official welcome ceremony attended by hundreds of relatives singing, dancing and waving Palestinian flags.

“It is a happy day for all of us and for our heroic prisoners who have come out today to live as free people,” said Abbas, surrounded by the prisoners and making a victory sign.

Abbas told the crowd that he would not sign a peace agreement with Israel without the release of all Palestinian prisoners in Israeli jails, who currently number almost 5000.

“It is like I came out from the grave and into life once again,” said Adnan Afandi, released after serving 21 years of a 30-year sentence.

Three prisoners crossed into Gaza, and another five were released from a border police base in East Jerusalem, said Israel Prison Service spokeswoman Sivan Weizman.

Israel’s Supreme Court late Monday rejected a petition against the release by relatives of the militants’ victims.

Twenty-six prisoners were also freed in August, 26 in October and a fourth group is scheduled to go free in March. In total 104 Palestinians jailed since before the 1993 Oslo interim accords are to be released as part of an Israeli gesture agreed to kick-start negotiations.

Hundreds of Israelis, including relatives of victims of Palestinian attacks, earlier protested in Jerusalem amid a large police presence, chanting “No to the release of murderers!” and “Death to terrorists.”

They held up portraits of people who were slain by the militants being freed.

Most of the 26 inmates were convicted of killing Israeli civilians.

The negotiations are in crisis due to arguments about security measures in the Jordan Valley, along the eastern West Bank, and a call by right-wing Israelis to annex the valley and extend Israeli law over its settlements.

“We will not allow them to do this,” Abbas said. “This is a red line that should not be crossed.”

Palestinians are furious about an Israeli plan to announce the construction of more settler homes, but Netanyahu insists that a settlement freeze was not a precondition for the current talks.

“Two vans carrying (18) prisoners left Ofer prison and were headed to Ramallah” in the West Bank, the official said, adding three other prisoners were being released to the Gaza Strip and five others to east Jerusalem.