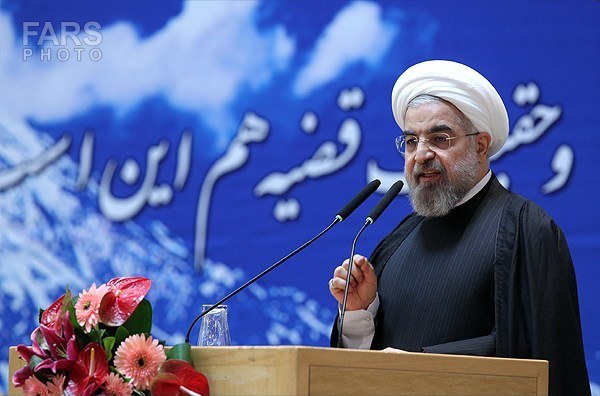 Mehr News quoted the president’s official website report about the Cabinet meeting headed by President Rouhani on Sunday. President offered condolences for the anniversary of the passing away of the Prophet and the Third Imam Hassan (as) and Eight Imam Reza (as) to the nation. “The Iranian nation display their true love and reverence of the Prophet and his Household in Moharram and Safar months (the first two months of the Hegira calendar),” added the president.

“In December 30 2009, people felt their beliefs and values was being violated by the enemy and thus moved to counter the disrespect to their beliefs. They did not come to the scene to support any party and faction, but to support the Leadership, the system, Islam and to respect Imam Hussein (as), and their religious beliefs,” said Rouhani.

A great lesson for us to be learned from the school of the Prophet (as) would be that a necessary thing to uphold and promote the God’s message was good conduct, flexibility, and compassion to people; and the necessary element for a system to live was seeking the public voice in the matters of governance, Rouhani was quoted to have said.

“Imam Hassan (as) was the quintessential heroic lenient of the history with his courage and foresight, as he succeeded to lead the Islamic society of the time to peace and extinguished the fire of sectarian war among the Umma,” he added.

“Imam Hassan (as) knew the courage for peace, if not important as to fight and to be killed, was no less crucial,” Rouhani asserted. “He bore the brunt of extremists’ reproach so as to protect the unity of the Muslims and the Prophet’s school of thought, and to secure the social coherence and the core of Islam,” he said.

Rouhani also pointed to the anniversary of December 30 2009 (Day 9th) and the Day of Foresight. “When our people felt their beliefs are under insult and their morality and ethics breached, they moved and responded the necessary reaction to foreign elements of the event,” he asserted.