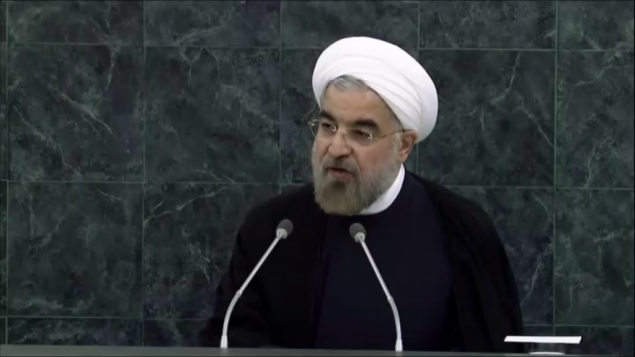 Islamabad, Dec 28, IRNA – A prominent Pakistani religious scholar on Saturday said that adoption of World Against Violence and Extremism (WAVE) act based on Iranian proposals by the United Nations General Assembly (UNGA) is the failure of western conspiracies against the Islamic Republic.

Talking to IRNA, patron in chief of Imam Khomeini Trust (IKT) Allama Syed Iftikhar Hussain Naqvi said that Iran is a peaceful country and has always respected the independence of other states.

“No doubt that adoption of WAVE act is the success of Iranian diplomacy,” he added.

On December 18, President Hassan Rouhani’s World Against Violence and Extremism (WAVE) proposal was ratified at the UN General Assembly with 190 positive votes.

The WAVE Act calls on all nations across the globe to denounce violence and extremism.

The Iranian President made the proposal in an address to the UN Disarmament Conference in New York on September 25.

Allama Syed Iftikhar Hussain Naqvi expressing his views said that Iran has never pursued aggressive designs and that is why they have entered into a deal with 5+1 group over their peaceful nuclear program. “At last the West has accepted Iran’s peaceful enrichment right,” said the scholar.

Managing Director of ‘Such TV’ added that adoption of WAVE act shows that the world is standing by Iran despite all kinds of negative western propaganda against the country. He was of the view that the WAVE act must be fully implemented to restore peace to the world.

The scholar said that power of veto must come to an end. He added that the UN was established after the World War II to bring peace and stability in the world but so far the organization has failed to achieve its objectives.

Naqvi said that US has used the UN for its own interests and that has ruined the peace of the world.

He said that today the world is standing by Iran because the Islamic Republic has always perused a policy based on principles. “Iran is a peaceful country and wants to work with international community for the stability of the world,” he said.

The religious scholar added that Iran is a country that has always respected the borders and independence of other states.