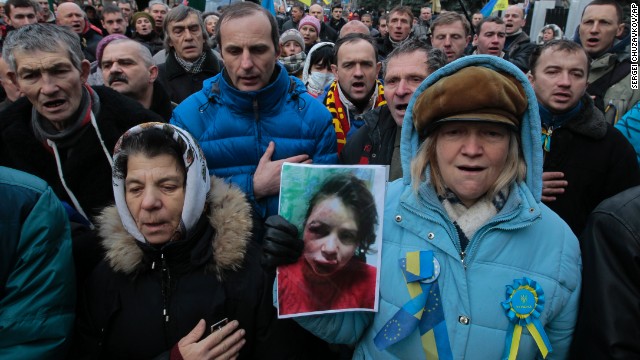 (CNN) — A prominent Ukrainian civic activist and journalist was beaten on Christmas Day by a group of men who dragged her from her car outside of Kiev in the latest attack on government opponents, authorities said.

A dashboard camera in Chornovol’s car captured part of the attack on the 34-year-old journalist known for her muckraking investigations into corruption among senior state officials, according to the opposition Batkivshchyna party website.

A still image from the dashboard camera footage showed the black SUV that struck Chornovol’s car moments before the assault.

On Thursday, the U.S. embassy in Kiev sharply condemned the beating in a statement. It called for an investigation, “which unlike previous such incidents must result in those responsible being held fully accountable under the law.”

The embassy alleged that people were being targeted for their involvement in pro-European Union protests.

“These are unacceptable violations of civil liberties that have no place in a modern, democratic society,” the embassy said.

The attack on the activist journalist comes as Russia agrees to buy Ukrainian debt and slash the price Kiev pays for its gas — an economic lifeline from President Vladimir Putin as Ukraine is rattled by protests calling for closer economic ties with Europe instead.

Under the deal, Putin said Moscow would buy $15 billion in Ukrainian debt by investing in its national welfare fund. The cost of Russian gas supplied to Ukraine was cut from more than $400 per 1,000 cubic meters to $268.50.

The deal has been criticized by the tens of thousands of protesters who have poured into the streets of the Ukrainian capital for weeks, angry at Yanukovych for spurning a trade deal with the European Union last month and turning to Moscow for help.

Lithuanian Foreign Minister Linas Linkevicius condemned the violence and intimidation against participants in rallies in support of Ukraine’s integration into the European Union and calling for the ouster of President Viktor Yanukovych, according to the state news agency UKrinform

“Intimidation and violence against (pro-European Union) activists must be stopped,” Linkevicius wrote on Twitter.

In a post on his Facebook page Wednesday, independent journalist Mustafa Nayyem said supporters of Yanukovych and his administration were complicit in the brutal attack.

Pictures and a video of the journalist posted online showed Chernovol with the right side of her face and her lips swollen and bloody, according to Russian state-run RIA Novosti news agency. Sources on various social media pages said she was hospitalized with a concussion.

Yanukovych urged police Wednesday to investigate the attack as quickly as possible, the news agency reported.

The attack was the second on a Ukrainian opposition activist in as many days, according to RIA Novosti . Dmitry Pilipets, a civic activist and organizer of protests in the eastern city of Kharkiv, was stabbed four times on the street by two unknown male attackers late Tuesday night. He was hospitalized Wednesday in stable condition, according to the news agency.

The latest assault could increase tensions between the state and demonstrators who have braved sub-zero temperatures and set up tents and barricades in the city center to voice their opposition to closer ties with Russia.