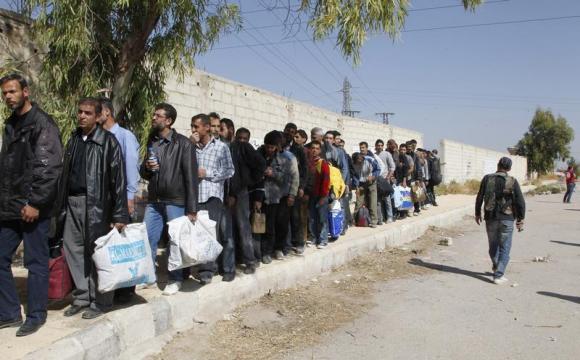 (Reuters) – Syrian government forces and rebel fighters in a besieged Damascus suburb have agreed to a 48-hour truce that could result in food being allowed in for residents threatened with starvation, activists said on Thursday.

Free Syrian Army (FSA) rebels occupied Mouadamiya last year and the government has been trying to win it back since with a siege that has choked off food, medicine and fuel.

Children have died from malnutrition in the town, and thousands of people face starvation. Some have resorted to eating leaves to survive.

The fragile ceasefire in Mouadamiya, 10 km (6 miles) southwest of the capital, began on Wednesday with the raising of a government flag on the town’s tallest building.

If the truce holds until Friday, the army has said it will allow food in.

The ceasefire is unlikely to be repeated in other parts of Syria where more radical rebel groups operate, but it raises the prospect of a respite from violence and hunger in one of the country’s most hard-hit areas.

An activist close to the deal told Reuters negotiations had been conducted between the FSA military councils and local members of the government’s military and political departments.

If the truce holds and the government provides access to food, the activist said, a broader agreement could be implemented which might include the rebels giving up heavy weapons.

“The regime said it wanted the heavy weapons like the tanks and cannons,” he said. “It also said that it is willing to buy these weapons and pay for them,” he added. “There are no guarantees from either side. This is war.”