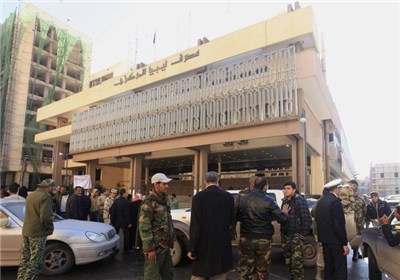 TEHRAN (Tasnim) – Dozens of Libyan protesters blocked the entrance to the Central Bank of Libya and port in the capital Tripoli on Thursday, demanding the resignation of Prime Minister Ali Zeidan.

A witness said that the armed men drove up to the central bank in trucks on the seafront in central Tripoli and stopped staff from entering the building.

“Central bank staff was told to go home,” he said

The protesters then blocked the entrance to Tripoli’s nearby port, the witness added.

Libya is in turmoil with Zeidan’s government struggling to assert control of the North African country awash with arms from the 2011 uprising which ousted Muammar Qaddafi, Reuters reported.

Many groups who helped topple Qaddafi refuse to disarm so they can press on authorities for political and financial demands.