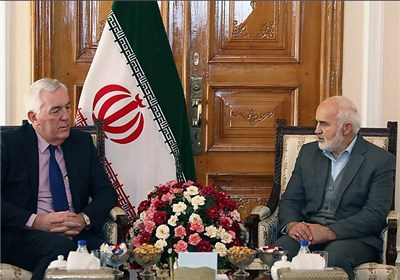 TEHRAN (Tasnim) – A prominent parliamentarian said on Tuesday that the Iranian Parliament is ready for facilitating comprehensive expansion of relations between Iran and Australia.

Speaking at a meeting with Australian Ambassador to Iran Gerald Paul Feeley here in Tehran on Tuesday, Ahmad Tavakoli, member of the parliament’s planning and budget commission, called for closer cooperation between Iran and Australia.

“Iran’s rich natural resources and its progress have paved the ground for the further expansion of relations between the two countries,” Tavakoli stated.

Referring to the nuclear deal made between Iran and six world powers in November, Tavakoli said that the Geneva agreement was not the result of the unjust sanctions imposed on Iran by the West, but was Iran’s measure to prove that the country’s nuclear program is “transparent” and Tehran’s emphasis on the Iranian nation’s inalienable nuclear rights.

The Australian ambassador, too, said that his country is prepared to exchange views and consult with the Iranian officials for expanding bilateral economic and trade ties.

As regards Iran’s nuclear deal with the six world powers in Geneva, Feeley said, “The current deal is a move forward and both sides should use this opportunity achieved by diplomacy to ensure the interests of the two countries and the region.”

Under the Geneva deal, the six countries agreed to provide Iran with some sanctions relief and to impose no new nuclear-related bans in exchange for Iran’s commitment to limit certain aspects of its nuclear activities during six months and allow for more inspections. The goal is to create a breathing space for a comprehensive agreement to be negotiated that both sides hope will end the standoff over Iran’s nuclear program.