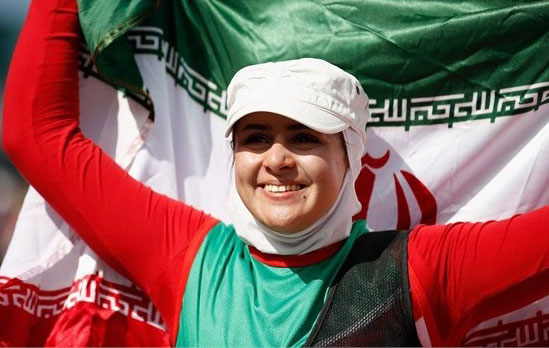 In winning Archery gold at the London 2012 Paralympic Games, Zahra Nemati made history by becoming the first Iranian woman to win a gold medal at either an Olympic or Paralympic Games.

Her success in topping the podium in London generated a lot of media coverage in Iran which has not just helped to break down perceptions of people with impairment but has inspired other women to take up sport.

Born in April 1985, Zahra had black belt in Taekwondo before she was involved in an accident in 2004 with a spinal cord injury. Two years after the accident, the university student took up archery and quickly proved to everyone that her impairment was not a limitation. Just six months after taking up the sport she took part in the National Championships, competing alongside able bodied archers and finished in third place.

As a result she was invited to join the National Archery team and has won a medal in every Championship she has competed in since. Her achievements have included: during a two-year period competing with able-bodied archers, she won individual bronze and team silver & bronze medals in Asian competitions. Also in her first appearance in para-archery at the 2010 Czech Republic Championships she broke the world record while winning individual gold and Team & Mix silver medals.

At the 2011 Archery World Championships in Italy, she broke the world record in four distances and also in the 30m event. At London 2012 she set a Paralympic record to win individual gold and also picked up bronze in the team event.

As a result of her achievements, her determination, courage and self-motivation have led her to become a role model in Iranian society, helping to change perceptions of people with impairment.

The number of people practicing para-archery in Iran has also increased due to her achievements. The International Paralympic Committee (IPC) is committed to enabling Paralympic athletes to achieve sporting excellence and to develop sport opportunities for all persons with a disability from the beginner to elite level. In addition, the IPC aims to promote the Paralympic values, which include courage, determination, inspiration and equality.