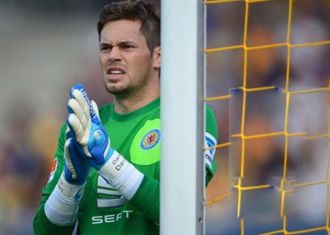 Tehran Times – Daniel Davari was voted the best player of the Eintracht Braunschweig during the first half of the Bundesliga season.

Daniel Davari helped Eintracht Braunschweig to return to the top tier of German football after an absence of 28 years.

The 25-year-old goalkeeper has been invited to Iran football team in January and made his debut against Thailand.

Iran has been drawn along with Argentina, Bosnia and Herzegovina and Nigeria in the 2014 World Cup.