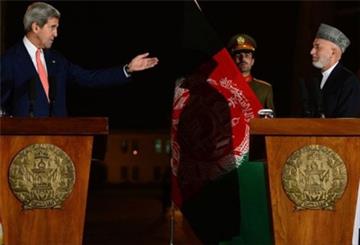 US pact does not benefit Afghanistan: Iran official

An Iranian official says the controversial Bilateral Security Agreement (BSA) between Washington and Kabul will not benefit Afghanistan.

“We do not consider the Afghan security agreement with the US beneficial for Afghanistan’s future and we have concerns about it. We have already clarified our stance,” Deputy Foreign Minister for Asia-Pacific and Commonwealth Affairs Ebrahim Rahimpour said in an interview on Monday.

“Given our concerns and the needs of both sides, an agreement has been made with Iran, which is on the agenda [to be implemented],” he added.

He said that Iranian and Afghan foreign ministers are to finalize and ink the comprehensive agreement, which includes security cooperation.

The security deal between Kabul and Washington would determine the presence of US soldiers in Afghanistan beyond the set deadline of 2014 withdrawal.

The pact would also grant legal immunity to those American soldiers who remain in Afghanistan – something that has turned into a sticking point.

Afghan President Hamid Karzai has said he will not sign the BSA until certain conditions are met, including a guarantee from Washington that there will be no more raids on Afghan homes.

The US has been pressuring Karzai to sign the pact but the Afghan president says the matter should be left to the next government after the April elections.

The United States and its allies invaded Afghanistan in 2001 as part of Washington’s so-called “war on terror.” The offensive removed the Taliban from power, but the country is still grappling with mounting insecurity.